So, this is thirty.

In the first third of my life – I’ve come pretty far. I no longer require diapers, can walk on my own two feet and live on my own.

I’ve had loves of my life – only to have them move on, made countless acquaintances but only a few true friends.

I’ve had some highs on some incredible rides and I’ve had some significant lows; none worse than when I lost my Mother suddenly back in 2004 – and then was lost, myself.

Until, one day in 2010 – in the basement of Packard Hospital – I realized this wasn’t the life I wanted. Staring at the same model of hospital bed that I watched my Mother pass away on – soaked in blood – I vowed a change.

And so, I did just that.

I fulfilled a promise and graduated college. I pushed myself professionally at an airship company.

And I had the time of my damn life.

I met a spunky young coaster enthusiast – who to this day makes me look amazing on film, and who shares in a dream of a better tomorrow through entertainment, enthusiasm and saying the word “poo” whenever possible in our documentaries.

I’ve made some mistakes, and will sure make a ton more – but so long as I learn something from them – they’ll always help me in the long run.

All the while, each and every day I’ve lived, all 10,927 and a half of them – brings me the experience necessary to take on the next challenge. I may not have seen it at the time, but it’s all been part of this grand journey we call life.

Here’s to the next two thirds (and more!) 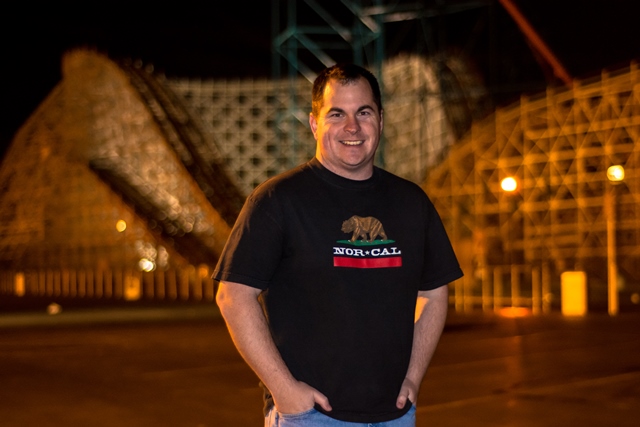 Photo by the great Nicholas Laschkewitsch

This entry was posted on February 13, 2014 by Great American Thrills. It was filed under Amusement Parks and was tagged with 30, birthday, great american thrills, happy birthday, kris rowberry, kristopher rowberry, thirty, turning 30.