Making a Connection to the Past

The annual Family trip to the amusement park was far more than just a time to ride.

I’ve found myself becoming a bit jealous while working on the “Lost Parks” series. So many of the people we’re working with have first-hand memories of the parks we’re featuring. While history tends to skew towards the positive on these, it’s still a bit depressing to hear how awesome these places were – from those who experienced it first hand.

True, we did experience Pacific City’s “odious odor” quite by chance and dumb luck while filming at the site, but that’s about it.

And that’s when I realized it – I had a connection to my amusement past that I could still connect with.

You see, while I was having the BEST DAY EVER at Great America back in July of 1990, my Mom snapped this photo of me on Carousel Columbia’s upper deck. My Grandmother was somewhat cropped out just to my left.

With my Mother passing in 2004 to Leukemia, the near loss of my Grandmother this year and the launch of the brand, I thought the time was right to try and re-create this scene.

So, 22 ½ years later, I went to the park with a mission – to find that same horse and to see if it was even possible to re-create that photo.

Now, the odds were against me from the start. You see, every off-season the park removes all the horses to refurbish them for the next years’ abuse thousands of riders per day.

In addition, finding them all in the same order would be tough – surely they’d have been shuffled once or twice. Plus, fiberglass eventually wears down and requires complete replacement (I.E. trashed).

After scouting out the upper deck, it appeared my dream was dashed. No sign of the plastic pony I had been photographed on over two decades ago.

On a whim, I decided to head down to the lower deck, and take my chances there. Not thinking much, I waited for the ride to finish the previous cycle, and took a quick walk around the turntable before the ride began. Is this the same horse from over two decades ago?

That’s when I spotted him. Sitting right there on the bottom turntable, next to the chariot.

Strip away the paint and jewels – and just look at the pose of the horse. It was clear, this had to be the one. It was still here, albeit with some more jewels and a new paint job.

Now, I know that these horses are models – they’re based off of molds that have been re-used countless times. But I also know that even molded horses are expensive to replace.

All that being said – at least in my heart, this was still THE horse.

At long last, I had found my connection to amusement park history. Now, the planning could begin to actually recreate the photo

So now, I get to move onto my next task…convincing the park to move it back upstairs…

As for those short shorts I’m wearing in the first photo? Don’t expect me to be wearing them when we try to remake this shot. 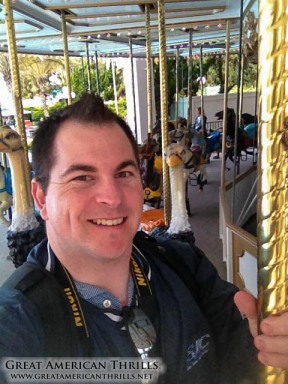 While not on the same level, it’s still awesome to think I was in this exact same place over two decades ago.

This entry was posted on April 9, 2013 by Great American Thrills. It was filed under Amusement Parks, General Travel, Theme Parks .