Photo of the Day: Asiana Airlines Flight 214 Wreckage at SFO 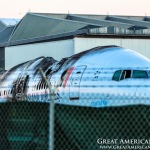 Now, I’m a big fan of all things aviation – but to take these photos yesterday was both a sobering and ethereal moment for me.

To think of what this aircraft and more importantly, it’s occupants had been through made this one of the more difficult subjects for me to shoot.

Nonetheless, it’s important to document – to think so many people WALKED AWAY from this wreckage is simply astounding.

Interested in purchasing / using some of my photos? Check out my 500px: http://500px.com/GreatAmericanThrills/sets

Amazing how many people survived today’s crash – but what’s more amazing was the “meh” attitude of some of the passengers AFTERWARDS! our thoughts and prayers are with those who were injured and may have lost loved ones today…

As a fan of flying and aviation – you always wonder about those people who ignore the safety warnings or don’t put away their notebooks after flight attendants tell them. Maybe you should re-think that the next time you fly…

How to Not Evacuate an Aircraft. Photo illustration by Kris Rowberry.