Diane Disney Miller, the last surviving , direct descendent of Walt and Lillian Disney passed away earlier this week in San Francisco, from complications due to a fall she sustained several months ago. She was 79 years old. 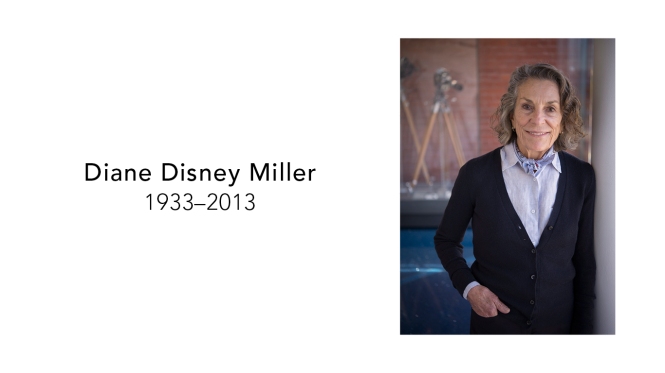 The front page of the Walt Disney Family Museum today – simple and understated.

Miller is best known as the champion of the “Walt Disney Concert Hall” in Southern California, as a winery proprietor in Napa at Silverado Vineyards as well as the backing behind the Walt Disney Family Museum, located on the Presidio in San Francisco.

It is said that Diane and her sisters’ favorite book growing up was a book by British author, P.L. Travers. The story, about a magical Nanny was so popular in the Disney household, the sisters would routinely beg their father to make a movie of the book – an odyssey that took Walt Disney 20 years to complete. The upcoming Disney film, “Saving Mr. Banks” tells the behind-the-scenes story of how Walt was able to finally get the rights to make “Mary Poppins” (considered by many to be the greatest Disney film of all time).

The film releases in the U.S. officially on December 20th.

Miller was a philanthropist by all definitions – donating millions to causes near and dear to her heart, usually related to the arts. She will be sorely missed in the arts, wine and amusement park communities.

She is survived by seven children, 13 grandchildren and one great grandchild.