If you’ve been to Universal Studios in Hollywood, the odds are pretty good you’ve taken the famous “Studio Tour.” A mainstay of this attraction since 1988, “Earthquake: The Big One” allows unsuspecting tourists to experience a simulated magnitude 8.3 tremor. 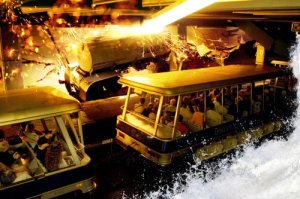 Speaking from experience – it’s more like a solid 5.0 to me – but I digress.

Anyone who’s lived in the Bay Area however, will take note that the show in Soundstage 50 show might seem a bit TOO familiar to them. That’s because the designers of this attraction took many pains to recreate a Bay Area Rapid Transit (BART) station.

Now, by today’s standards – the effects are okay, but dated. Maybe it was just me as a kid, but I seem to remember things happening a LOT faster back in the day. What I’ve always wanted to do, though – is experience the show like this video depicts, with full cinematic effects going and a cast. Oh, and at 24 frames per second, so it’s more dramatic.  Cost prohibitive? Most definitely. Bad ass and awesome? You better believe it:

Notice how they got the train right, and the station’s “Brutalist” style architecture? Heck, they even got the BART horn just about right, too! Note all the similarities in this, the SFO station built in the 1990’s: