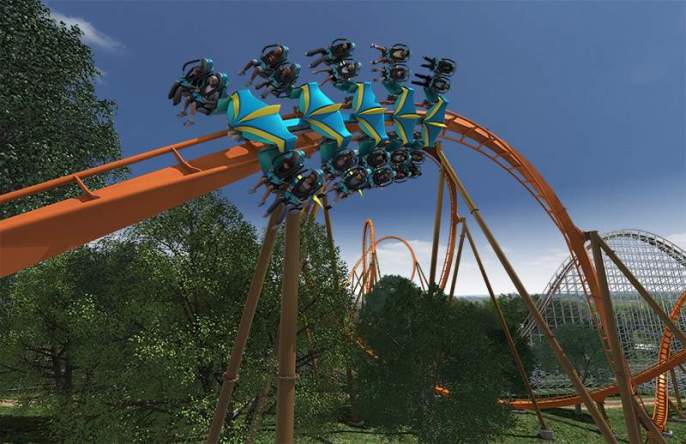 Can we get in line NOW? Photo courtesy of Holiday World, Paula Werne.

It’s sure to bring out the coaster faithful, and the thrill seekers to this once tiny park in the middle of Indiana. It also continues a meteoric rise in rise to fame to a park that most others could only dream of getting a whiff of.

Under the brilliant marketing guidance of the brilliant Paula Werne as well as operations and management from the Koch family, Holiday World has grown some a small, regionally known park – to a destination resort, complete with award winning rides and water park that are now internationally known.

The “keyhole” element on the wing rider is one of it’s greatest elements. Photo courtesy of Holiday World, Paula Werne.

And they did it without changing their core values or sacrificing their soul.

1.) They don’t charge for parking:

It’s one of the easiest streams of revenue for a park – pay just to arrive. Yet this one doesn’t – and still is able to add incredible rides. Makes you wonder where exactly that $25 at Six Flags is going, huh?

2.) Their admission is decently priced:

$39.99 is quite a bargain when parks such as Disney World and Universal continue their race to $100. Considering you parked your car for free, it looks even better. Count in all the discounts for Military, First Responders, etc – and it makes you regain hope for the family owned, American amusement park.

3.) The employees are some of the best in the business, despite being young:

You would think you were at a Disney park with the level of friendliness you’ll experience here. Their operations are fast, they’re always smiling – and I’ve never had a bad experience to report. On the contrary, each time I’ve visited – I’ve filled out a compliment card – and it’s always filled with names. Says a lot about their training.

4.) They offer FREE sunscreen in the water park:

This is no joke. They’ve got large vats (like ketchup dispensers) at strategic locations inside the water park – so you can ‘screen up. They also offer sunscreen for sale, if you’re looking for a more specialized SPF or tan.

5.) The water park is included in park general admission:

Others may have done it in recent years, but Holiday World was first to offer their water park as part of the general admission. No separate gate here, folks!

6.) They offer FREE, unlimited soft drinks throughout the park:

You read right. The veritable cash cow for any food-based establishment, soda is given away here. The catch? There’s soda

It’s not easy satisfying a group of people who are always in search of the “next big thing.” Speaking the language isn’t too easy, either. With phrases such as “block brake,” “chain dog” and “Zamperla” – it can get pretty confusing for rookies.

But the staff at the park not only learned the language – they excelled at it. The park has become a destination for coaster-holics around the world, because the park was always active in the online community.

So for everyone who says a family-owned amusement park can’t exist with the likes of Six Flags and Cedar Fair these days? Just point your GPS to Santa Claus, IN. Because they just proved you wrong. Oh, and they’re building a B&M – you can’t get much bigger (and better) than that.

What do YOU think? Is “Thunderbird” enough for you to take a trip to Holiday World and Splashin’ Safari? Do you think this park competes with the chains – and how does it stack up? Tell us in the comments section, below: