Today’s the big day – the coordinated announcements from all of the Six Flags parks on their new for 2014 attractions!

Looks like our local park, Six Flags Discovery Kingdom, actually made out quite well, with THREE major announcements today.

For a new attraction, the park will receive, “Tsunami Soaker” a teacup ride – with a watery twist. The park was sorely lacking water rides (there’s only two) and those hot Vallejo summers will mean long lines for this fun (and interactive) attraction.

Personally, I love when family attractions get put in – it shows the park has a balance to it, rather than adding extreme thrill rides each and every year, which tend to attract the, “wrong crowds.” 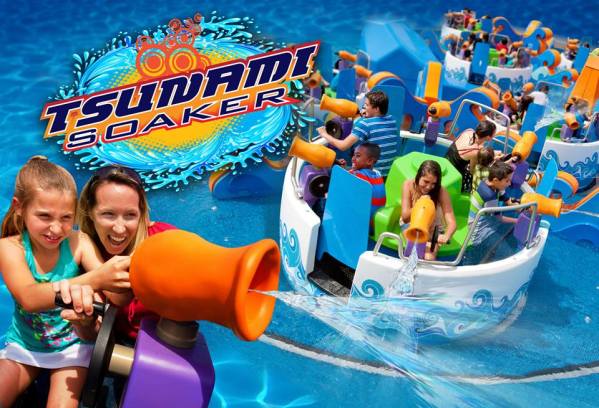 Our question – is where exactly will it go? The park isn’t exactly flush with space, so this means either a creative “shoe-in” somewhere in the park, or the removal of an older attraction.

We shall see, because we’re going to leave the speculation to those “other” sites…

In addition, the park has also announced that the popular “Cirque Dreams Splashtastic” WILL RETURN for a limited run again next season.  (Which is being overlooked by most other sites) This, combined with the addition of “Tsunami Soaker” gives families a great way to spend their day at Discovery Kingdom.

Cirque Dreams Splashtastic will return for 2014.

The park is going back to being open YEAR ROUND!

“With the region’s mild temperatures, being open all year means guests have even more opportunity to enjoy Discovery Kingdom’s wildlife and wilder rides,” said Don McCoy, park president. “In addition to our summer daily operating schedule, we will now be open on weekends year-round ― further cementing Six Flags Discovery Kingdom as the premier destination for affordable, thrilling entertainment.“

Now of course, this means seeing rides go down during that time, just like Disney does at their parks – it will be interesting to see how this new year-round operation affects, well OPERATIONS! Seasonal parks tend to struggle to keep staffing up for some reason in California, so we’ll see how this year-round push goes this time around.

Considering the move to an annual “membership” plans for season pass sales earlier this year, it’s not surprising – but still great to hear officially.

For a complete list of the new for 2014 attractions at Six Flags parks, including some truly insane record-breakers across the country – visit this link HERE. 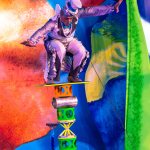 Yesterday evening, Six Flags Discovery Kingdom was kind enough to invite Great American Thrills™ out to the park for an exclusive preview of their latest entertainment offering – “Cirque Dreams – Splashtastic.”

The colors of the performance – just like the performers – are vibrant & stand out.

This program is unlike anything we’ve experienced here at a Northern California park – it’s very glitzy and the production value is VERY high. If you were a fan of the “Marriott Era” of entertainment offerings at, say Great America, or the quality of shows that Disney parks offer – then this show will bring back good memories for you.

It also sets a very high precedent for entertainment offerings in the coming years at all the Bay Area amusement / theme parks. (I.E. You’re on notice!) Unlike many other shows at parks which are produced in-house, Cirque Dreams – Splashtastic is a partnership between Six Flags Discovery Kingdom and Cirque Productions.

There are seven individual performances in all, this one featuring a hula loop artist.

If you’ve ever been to a “cirque” style show before, you’ll see many of those elements in the program (we can’t really call this a show – it’s much more than that). The program features a showcase of talents, that as the park says, “…combines the grace, power and agility of our bottlenose dolphins and the amazing spectacle of of true performance artists…” 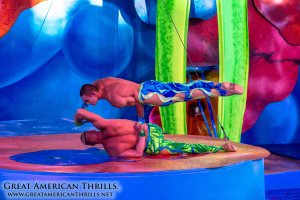 If you don’t feel out of shape after looking at this, you must be one of these two performers!

As you would expect, the entire program is themed with an aquatic flair to it. Costumes mimic sea life, actors are adorned with prosthetics to give them a more “fishy” quality and the entire amphitheater (formerly Dolphin Harbor Stadium) is adorned with colorful graphics strewn about the facility.

There are seven parts to the show in all, each with their own featured characters and skills on display. During pre-production of the show, nearly 300 acts auditioned to be one of those seven featured performances. 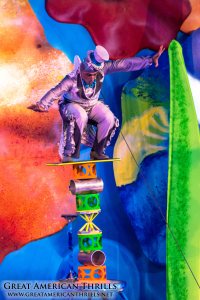 The pace is good and the program keeps moving for the most part with no real lag time. During the human performances, the dolphins show off their stuff as well, including a particularly entertaining dolphin hula hoop behavior that you’ll simply have to see for yourself.

The show was created, produced and directed by Neil Goldberg, an acclaimed Broadway director who also founded the Cirque Dreams troupe over 20 years ago. In other words, this guy knows what he’s doing.

“Our goal was to complement the personalities of the dolphins and performers through playfulness…and unparalleled showmanship,” said Goldberg. “It will be one of those unique, memorable entertainment attractions rarely experienced.”

I’ll be posting a full, exclusive interview with Goldberg later this week.

Colorful characters abound in this production – the first for a Northern California amusement park.

The only thing that I can find wrong with the show, is that it has a limited run – just from Memorial Day Weekend though August 11th. But in a way, that works – it makes it a limited engagement, so the performances are better and more special to those who witness them as spectators. It’s quality over quantity, and something that most parks would not think twice about.

I’ll be posting a full interview with the Creator and Director of Cirque Dreams Splashtastic, Neil Goldberg, later this week.

The dolphins are not always at center stage, unlike how most aquatic shows tend to be – rather, they work in tandem with the performers to create a sort of serendipity on stage.

For now – get your plans in now and get out to Six Flags Discovery Kingdom to experience this one of a kind piece of amusement park entertainment – it’s certainly worth the trip.

As always, Great American Thrills™ would like to thank those who made this post possible: Neil Goldberg, Nancy Chan, Lee Munro as well as the entire staff and crew of Six Flags Discovery Kingdom and Cirque Dreams – Splashtastic!

The entire cast takes a bow at the end of the program – to a standing ovation no less – during the first public performance.

I rent all my camera gear through my friends at: BorrowLenses