Why All Roller Coaster Enthusiasts Should Know the Name Eric Laithwaite 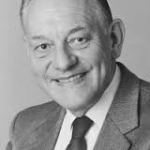 There are several names synonymous in the roller coaster and theme park community: Karl Bacon, Ed & Dana Morgan, Anton Schwarzkopf, Walter Bolliger & Claude Mabillard and Walt Disney, among many others.

But one in particular seems to have fallen by the wayside – Eric Laithwaite. And yet every enthusiast who’s ever enjoyed a modern, launched roller coaster owes those very thrills to him, because he is “the father of linear induction.”

Laithwaite’s most famous work centered around using magnetism to provide frictionless travel, on maglev trains. He had figured out that if you uncoiled a standard, electrical motor, an object could simply glide over it on an electromagnetic wave – and it would stay on course with the attraction and resistance already natural to those magnets.

But for parks, chain lifts were just fine modes of gaining potential energy – and the technology wasn’t seen for amusement purposes until 1975, with the debut of Walt Disney World’s Tomorrowland Transit Authority. While it kept a consistent pace to the ride – it’s hardly a thrill ride, too.

People at the time did not see the true potential of the futuristic, potential acceleration system. Computer control systems were still rudimentary by today’s standards – plus the weight drop and flywheel launches of Schwarzkopf and Arrow were doing the job just fine.

It would take over two decades before amusement ride manufacturers would take the technology to it’s full potential, with the debut of Premier Rides’ “Flight of Fear” indoor coasters at (then) Paramount’s Kings Island and Kings Dominion in 1996.

And, after a year of technical issues, the technology would reach it’s top speed, with the debut of Intamin’s spectacular Superman: The Escape at Six Flags Magic Mountain. It still holds the record for fastest linear launched coaster on Earth at 100 mph (on a good day).

With the explosion in launched coasters over the past two decades, just remember to add the name Eric Laithwaite to your coaster lexicon. Because without him – you would literally be going nowhere, fast.