Utah Olympic Park bobsled is the ride of your life

With the Sochi Olympics now officially open – the world will showcase the best in winter sports, many of which call to us thrill seekers.

But while most of us will never have the guts to try a ski jump or snowboard a half pipe – there is one Olympic sport that you CAN experience…and it’s one HELL of a ride, too!

And the best part – you don’t have to travel all the way to Sochi, or even Vancouver to experience this thrill ride – it’s just a short flight away, in Park City, Utah! 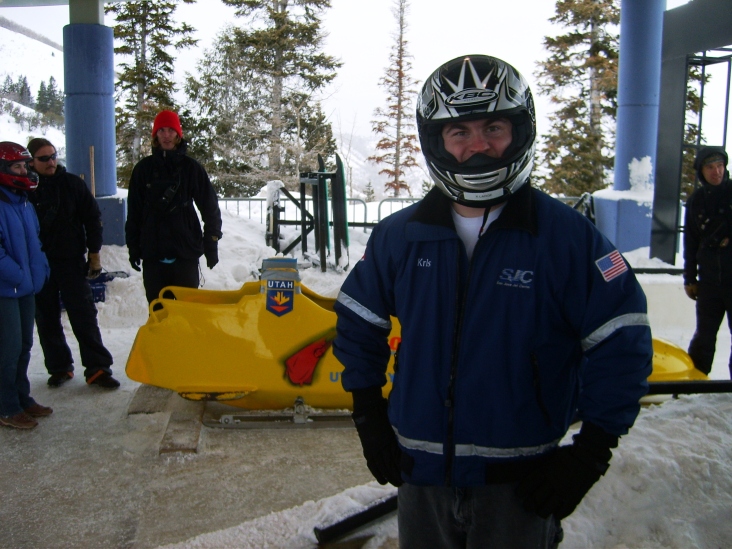 Preparing for the 80 MPH thrill ride that is “The Comet” at Utah Olympic Park.

The first part of the experience is in the classroom – that’s where you’ll learn about the course, the sled and safety concerns – and there are many of them. The most notable of which – is how to react if the sled flips. Officials said it doesn’t happen often – but it DOES happen. Even with an experienced pilot at the helm – it’s still a risky sport: 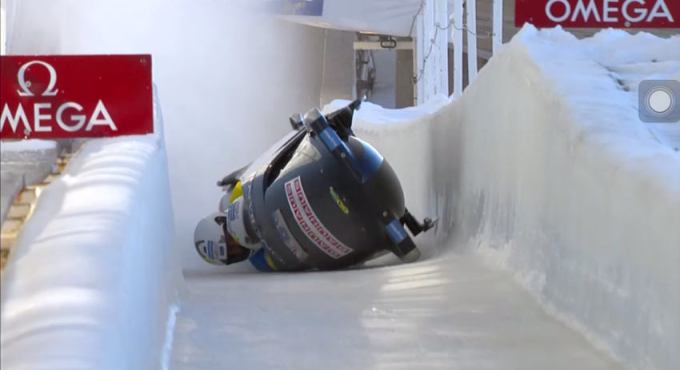 Participants of this thrill ride are warned several times, that a flip like this is a real possibility.

Despite what it looks like on TV, the ride is rough…VERY rough – and puts an incredible strain on your body. In some instances, g-forces reach between 5.0 – 6.0 G in an instant as you enter the turns. So, if you weigh 200 lbs, like me – that means you feel like you weigh 1200 pounds in an instant. People with heart, neck or back issues – need not apply.

This may look like fun (and it is once or twice), but it’s an incredible amount of work to steer these bullets on ice – while concentrating though incredible g-forces…these folks are TRUE athletes to be able to make multiple runs in the sleds each and every day!

Ironically, the “bobsled” coaster (built by Intamin of Switzerland) was a mainstay of many parks. Even before Intamin was created, “Flying Turns,” made of wood – were in many traditional parks around the country. Knoebels, a park known for taking daring risks to preserve ride history – recently debuted their “Flying Turns” – a wooden bobsled coaster that MET modern safety regulations and codes.

Of course, there’s also the “de facto” bobsled coaster – the Matterhorn at Disneyland… 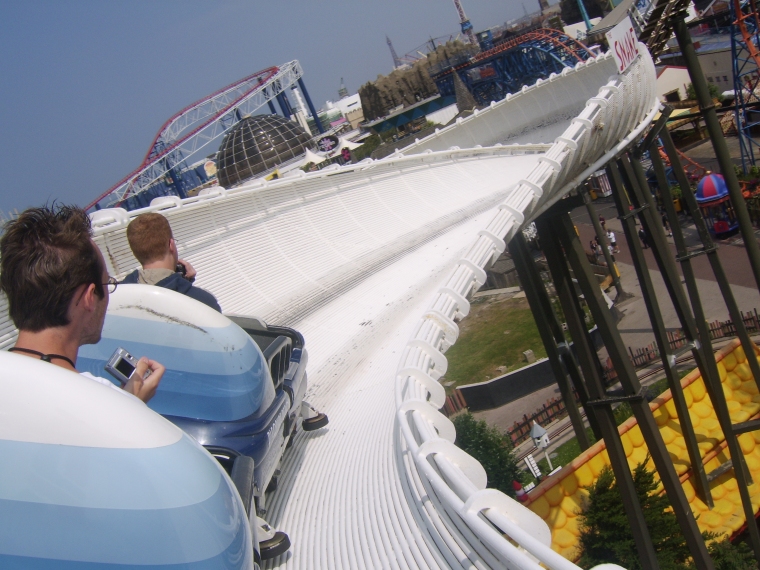 The Intamin Bobsled coaster saw a surge in popularity in the 1960’s through the 1980’s. 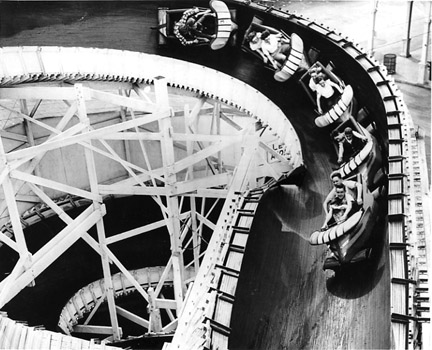 Flying turns were found at many parks – and saw a resurgence when Intamin began to market steel, less maintenance-heavy versions in the 1970’s.

Even more ironic – the bobsled is directly responsible for the development and impetus for the roller coaster. As far back as 1650, there are documented reports of Russian ice slides, which eventually added wheels to allow for year-round operation. (Except in Siberia). Eventually, hills and loops were added – and the modern roller coaster was born.

But, back to the present day – while Knoebel’s was able to bring back the tradition of the wooden “Flying Turns,” and Intamin had their bobsled coasters – they certainly don’t come close to the 80 mph top speed – but with that being said – they’re still definitely worth a trip to experience. 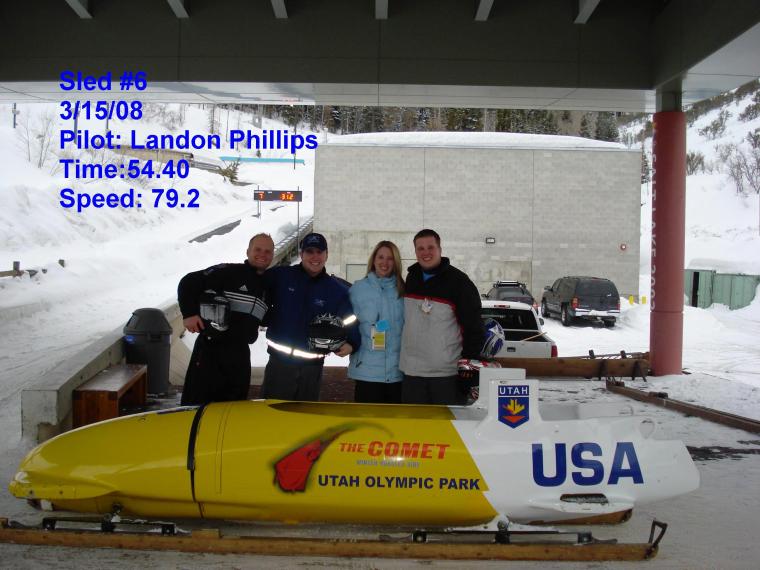 There is no way to describe the rush of screaming down a frozen pipe at nearly 80 mph, except to say, “Wow!”

That being said – there is ONE thing about the Comet that puts off many people – the price. A single plunge will cost you $199. But, for the true thrill seeker, it’s a worthy investment to say you rode (barreled) down an Olympic bobsled run at 80 mph…on blades and ice. (If you visit in the summer, they still run the sled, albeit on concrete and with wheels – at a slower 70 mph.

So while you watch the bobsleds scream through the Olympic course these next few weeks – grab a ticket on the Comet – and experience it for yourself!

Special thanks to Great American Thrills® friend, Lydia LaPutka for allowing me to experience this once-in-a-lifetime thrill!