#Hashtags – arguably one of the more confusing elements of social media.

In laments terms – a hashtag is like a folder on your computer – it’s a depository for anything that uses that phrase of tag. So, if you’ve just opened up a new coaster called, let’s say Iron Rattler for example, the logical hashtag you’d want to promote is: #ironrattler. Got a halloween event coming up? Why not use #HauntCGA (If it’s Great America for instance) or #KnottsHaunt for the Knott’s Berry Farm’s event.

The whole idea behind hashtags is to get people’s attention, quickly – as well as help people discover content they’re interested in.  That’s what keeps the user engaged and ultimately through your turnstiles. Because so many social networks are adopting this #hashtag feature, it behooves you to understand what they are and how to use them properly for you amusement park:

The longer a hashtag, the more often it will be misspelled. In addition, the harder it will be for people to remember. Say you want to promote a specific ride one day. Your park can post “Have you ridden #theplunge today? One lucky rider will receive a backdoor pass after their ride! #YOURPARKNAMEHERE

Then, you can watch the #theplunge tags, even if you don’t have social media management software (which you SHOULD be using, if you’ve read my previous posts HERE).

Say you’ve just opened up a new coaster called, let’s say Iron Rattler. The logical hashtag you’d want to promote is: #ironrattler. Got a halloween event coming up? Why not use #HauntCGA (If it’s Great America for instance) or #KnottsHaunt for the Knott’s Berry Farm’s event. You wouldn’t want someone else to be getting web traffic because of your event / advertising campaign, would you?

Not to be a shameless plug here, but whenever we shoot our “Lost Parks of Northern California” series – we always send out social media updates using the hashtag: #lostparks. Not only is it easy to remember, but it’s also unique in that it wasn’t being used before – therefore all the content using that hashtag is ours.

Remember that some social networks, such as Twitter – give the user only 140 characters to get your message out. A hashtag like #welcomebackspaceexplorers probably isn’t the best bet. But, breaking them up into two smaller hashtags is a better alternative, say #spacemountain #disneyland for instance.

Stick to these guidelines, and you’ll find your SEO increase as well as your interaction via your social media pages. Just be prepared to actually interact with your users – it is SOCIAL media, after all!

In my next post, I’ll discuss the top ten post ideas you SHOULD be doing at your amusement park, regardless of size.

Kris Rowberry has been following the amusement industry for over 15 years. He has curated social media accounts for several companies, totaling over 450,000 followers across multiple social channels. In addition, he is working on his latest video project: “The Lost Parks of Northern California”

Check out my other postings about Social Media and the Amusement Park HERE.

How Much Posting is TOO Much on Social Media?

Continuing my series on how social media can be used more effectively at amusement parks / FEC’s – just how many times should you be posting to your social media accounts on a daily basis?

Some experts feel that the higher quality the post, the less often you have to post it, while others feel that with all the filtering being done online, the more often you post, the better chances you have of actually being seen and / or heard.

The New York Times – arguably the most respected news source in the country – posts on average, seven to eight times per day. As much as you’d like to think your attraction has that much to tell the world – it simply doesn’t.*

Posting even HALF that often is enough to turn off your potential viewers. Yes, you are being filtered by Facebook and the new algorithm – but it’s not worth over-posting if most of your “likes” are going to mute your posts or worse, mark them all as spam.

If RollerCoasterTycoon had a social media option, I’d be posting a maximum of three times a day while open, once a day when closed.

Rotate the timing of each of these posts (i.e. Don’t post a funny / cool photo each day at 3:00pm, spice it up a little).

It should go without saying, but you simply MUST be scheduling posts – to try and keep up with each post each day will ultimately drive you nuts. To assist in keeping your sanity, a scheduling software solution, such as TweetDeck or HootSuite is an absolute must! (I’ll be going into more detail on how to use HootSuite with my #Hashtag post soon) 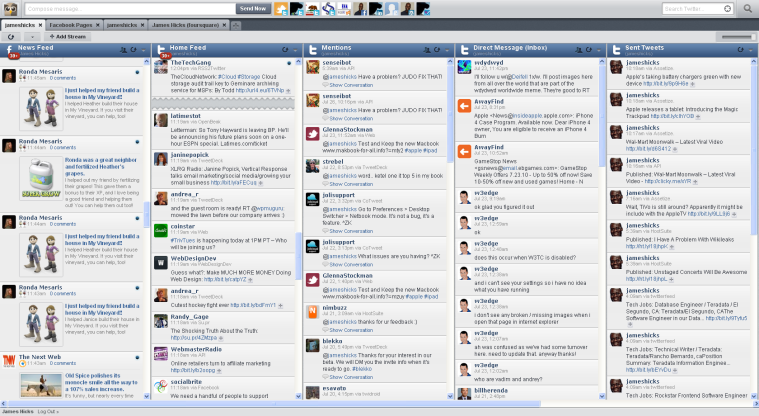 Also to help with keeping up with your quota – consider “banking” photos over your operating season, as well – if you can’t find anything interesting to post about one day, use one of those banked photos.

Remember that while rides are fun, most people visit parks to enjoy the fun WITH OTHERS. Highlighting unique groups in your attraction, big game winners and specific attractions is sure to bring in more views (plus more turnstiles rotating).

Fan submitted photos are also a great (and often overlooked) way to have your social media content create itself. But, as I said in my first posting on this series – never forget that the entire purpose of social media is NOT to sell to your followers directly – it’s to start a conversation and interact with them.

Once you throw up an update, be prepared to interact with people. “Like Bait,” as it’s known, has a place on Facebook, but it will never convert those eyeballs to your turnstiles unless they can feel a connection to your attraction. For instance, posting a cool photo of your roller coaster may get 1,000 likes, but people will also ask questions, too. Each one of those questions is an opportunity to connect (and THEN sell your product to them AND all their friends).

If you’re a seasonal park, take advantage of the off-season to show all the transformative work going on behind-the-scenes. Just be aware that trying to sell a season pass in the middle of the winter with a photo of a dry waterslide probably isn’t going to go very viral. However, a video of employees sliding down said slide in a bathing suit – in the snow, now THAT’S different!)

If you’re shooting your own photos to post on Facebook, Twitter and / or Google+ (and you should be) and you’re using a DSLR (i.e. NOT a cell phone camera) adding a watermark with your website or hashtag is absolutely necessary. People will inevitably share quality or memorable photos – and with watermarked information on them, your logo and website will be sitting right there in front of all those shares for consumption.

Which one of these social media update photos would YOU want to be saved as a follower’s new computer background? (Airship Ventures, 2007 – 2012)

So, don’t fill guests (or potential guests) feeds, walls or updates with tons of info, photos and sales pitches – just nurture them. There’s no reason to go crazy and post 15 Instagram shots of your newest ride. You’ll see your following grow and ultimately see more butts through the turnstiles.

In my next article, I’ll be talking about #hashtags – what are they? How can you use them to promote your attraction / FEC?

*The only exception to this rule is when your attraction is facing a crisis situation or dangerous weather conditions.