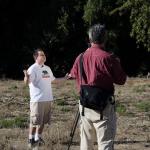 For those of you who missed the story that Garvin Thomas of NBC Bay Area, did of us, they’ve just posted the link (and article) online. We’ll try to embed the video here shortly, but until then…

You can find the article here, or copy/paste the link below:

Bay Area residents – be sure to tune in this evening to NBC Bay Area (KNTV) at 5:00p.m., as you’ll get a behind the scenes look at our latest “Lost Parks” project, “Santa’s Village of Scotts Valley.”

If you’re not in the Bay Area, you can catch the segment here, once it’s posted online.

Garvin Thomas (Emmy award winning journalist) followed the whole Lost Parks crew for most of the day, to highlight the work we’re doing. For those who have not seen the show, “Each week NBC Bay Area’s Garvin Thomas profiles the people, the groups, and the companies making the Bay Area, and the world, a better place to live. Bay Area Proud stories are success stories; inspiring profiles of those making a positive change in our communities.”

Special thanks to Garvin Thomas and Claire the Intern for hanging out with us and seeing what “Lost Parks” is all about. Photo by ACE NorCal, used with permission.

Be sure to give him a like or follow to see many of his other uplighting stories and subjects. Even he had to admit, he has the best job in all of journalism – covering only positive stories.

Check out our video series here.

So, who’s inspired to go preserve a piece of history?