After a name change before it opened to the public and just three days of operation, both California’s Great America and Knott’s Berry Farm removed their “Fear:VR” attractions from their Halloween Haunts after mental health advocates in Southern California cried foul.

In their letter to Cedar Fair, the President of the Orange County chapter of the National Alliance on Mental Illness said, “The attraction adds to the hurtful, dehumanizing, discriminatory, prejudicial, insensitive, offensive and stigmatizing of mental illness. (We believe) it is in the poorest taste that mental illness stereotypes are being used by entertainment sources for commercial gain.” 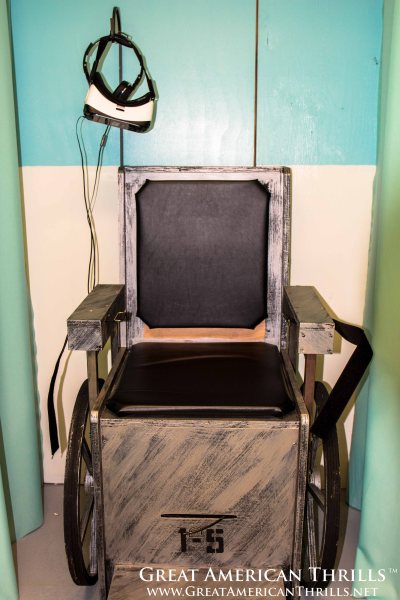 “For nine years we have delivered unique and immersive haunted experiences to our fans and loyal guests. Our evening attractions are designed to be edgy, and are aimed at an adult-only audience. Over the past week we have heard from a number of people expressing their concern that one of our temporary, Halloween attractions – FearVR – is hurtful to those who suffer from mental illnesses. Contrary to some traditional and social media accounts, the attraction’s story and presentation were never intended to portray mental illness. As it is impossible to address both concerns and misconceptions in the Halloween time frame, at this time we have decided to close the attraction.”

For those of us who DID experience it, the consensus was clear: it WAS scary as all hell. It was a better, overall use of VR than on a coaster – because you didn’t know what to expect. It truly immersed you in the program. But – was it offensive, insensitive and stigmatizing? And more importantly, should that matter when it comes to a fantasy event like Halloween Haunt?

On the one hand – it’s a Halloween event. It’s supposed to be a little “off.” Hell, Knott’s regularly MURDERS and HANGS celebrities (in effigy) twice a night in Calico Square. Yet, you don’t hear from those who decry the death penalty or for those wanting more gun control – because everyone knows it’s fake. It’s built into the event.

I don’t remember the “hospital” in Fear:VR focusing on mental health in the storyline. We went into the room for an “ocular” exam. There was a backstory about a young girl who was possessed in some way, but it was never made clear that the facility we were at was anything more than a regular hospital.

On the other hand, is mental health a huge stigma in our society? Absolutely. Could this attraction possibly play into those stigmas? I suppose you could say, “yes” given the reality many interpreted it as. But then again, the whole Haunt experience is one big stigma / stereotype when you think about it. Are all farmers murderous, un-educated hicks? Then Cornstalkers must go. Are all clowns homicidal maniacs? Killer Klown Town has to go too – it could be offensive to genuine, circus performers. Is a hospital full of half-dead zombies going to trying and kill you if you check into a mental clinic? No, it isn’t.

Cedar Point tried a similar attraction a few year ago – and it met the exact same criticism and ultimate demise. How the company thought that in CALIFORNIA of all places that this would fly, is a question for someone above my pay grade. One must also wonder if the park’s “INsanitarium” maze might be in the cross-hairs as a result of all this activity.

The other question that I don’t think we can answer is this: Where do we stop with this? I don’t claim to have the answer – I don’t think any of us do.

Recently, a lot of people were pretty “upset” that In N’ Out Burger didn’t offer a vegetarian burger. They made a petition that got a ton of play online and loads of media attention. Yet, do you see meat eaters going into vegan or vegetarian restaurants, demanding beef? But I digress, let’s get back to the parks…

There is one thing I think that we CAN agree on: there is difference between fantasy and reality – and there’s no reality in a park’s Halloween event.

The chainsaws don’t have chains, the monsters have no magical powers and all of the blood is fake. Are we laughing at the dead, the murderers among us or the worst of our society by celebrating Halloween like this? Of course not. It’s just fantasy.

What do you think? Should the parks have shut down the attraction, or is this just a massive blow up for nothing? Let me know in the comments section below – but please keep it civil: