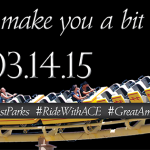 Something BIG is coming from Great American Thrills.

But that doesn’t mean you can’t figure it out before we announce it.

Head on over to our Facebook page, give it a “LIKE” – see if you can figure out the hints. Be sure to leave us a COMMENT with your guess, too. Like we’ve said before, “…no one saw this coming,” but if you can put together all the clues – you’ll be in the know before anyone else.