Despite your personal opinion of the site, Yelp.com has become the de facto review source for many users on the internet. The site says that it’s “Real People, Real Reviews,” and with your amusement park being a major business in the area, chances are someone has already reviewed you and / or created a page for your park. So, how do you monitor and work Yelp to your needs? Read on:

1.) Create an officially moderated Yelp business page, then have it verified: 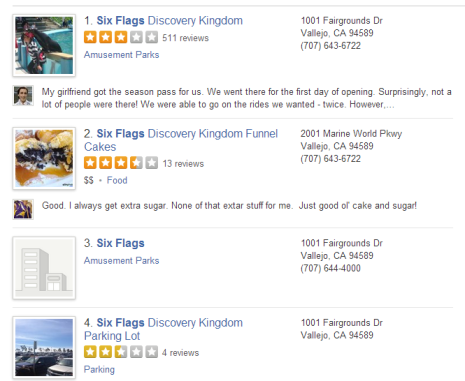 Multiple pages created by guests only add to confusion in search results and SEO. Plus, misinformation will spread faster.

When searching “Six Flags” in the Bay Area, these are the top four results. Note how there’s seemingly multiple accounts for the park, with reviews about the park in each one. This only makes people confused when they’re trying to find you online. True, the more of you out there, the better for SEO – but not in this case.

By creating an official, park moderated page, Yelp will be more inclined to remove errant listings, making it easier for people to find and review you. Plus, it makes it far easier to respond to guests when there’s only one place to go.

Is this really an accurate review? Hardly – so why allow it to sit for others to view?

It should go without saying, but Yelp is yet another place that you need to be monitoring your image online. Just like your Facebook, Twitter and other social media accounts, Yelp should be monitored closely to make sure that any reviews placed on it are fair, accurate and not derogatory towards your business.

For example, the posting above – is it really an accurate portrayal of the park? Absolutely NOT! So why then would you allow it to stay up, for others to view 24/7? Yelp also gives you the ability to flag reviews for abuse – which is what this one should have done to it.

At the very least – a post like this should be responded to from the park’s official account with accurate information. 95% of angry guests will be quelled once they see the park responding directly to them. Don’t think of it as damage control – think of it more as an opportunity to make a new sale by bringing a guest back. Who knows – they just might upgrade to a season pass… 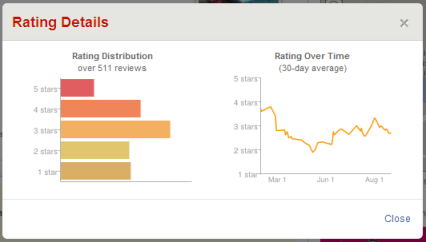 Would you eat at a “C” graded restaurant? How people portray you on Yelp has a major impact on decisions to visit.

Look, we’re all human, so we’re not perfect. Mistakes sometimes happen, so it’s up to you to recognize these and make them right wherever possible. But completely ignoring your internet footprint (especially on Yelp) isn’t going to make bad reviews go away.

If a bad review comes in, try to contact the guest first, off of Yelp. Get more information, and then proceed to see what can be done to correct it in the future. Remember that the sooner you contact an angry guest, the better the park looks in their eyes for wanting to assist.

Ever wonder why some companies NEVER have a bad review on Yelp? Is it because of the service or business? Maybe. Mot likely, it’s because they pay for those reviews.

You heard right. What most people don’t know, is that companies can actually PAY to look better on Yelp. Yes, call it a shakedown, call it what you will. But the good news – you don’t have to give money to Yelp.

Just by monitoring and responding to reviews through your own company, much as you would with a customer service agent over the phone, or guest service manager would in the park – you’ll see your numbers trend upwards. At the very least, you’ll start getting a better pulse about what your guests are having issues with, and can adapt your business model around it.