Hidden in plain sight above Bourbon Street in Orleans Place, lies a little bit of Disney magic inside the confines California’s Great America: 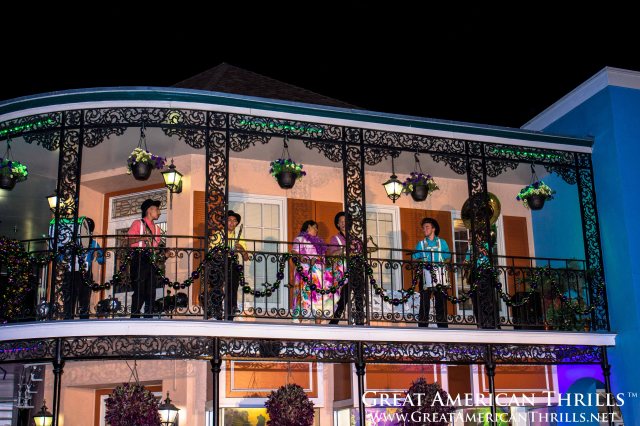 The balcony of the Consulate as seen during the Taste of Orleans festival.

Known as “The Consulate” – it’s primary function is a meeting room, where some of the biggest decisions about the park have gone down.

Some of the biggest deals in the park’s history have been signed at this table. Photo courtesy of The Coaster Guy – used with permission.

But that wasn’t always the intended purpose. In fact, it was originally built with the idea that the Marriott’s would use the space to stay during trips, a la the apartment above the firehouse at Disneyland. That is, until the Marriott’s realized they had nice hotels already near their properties with concierge service and a lack of crowds.

So while the Consulate is still used today for business – what if it’s wrought iron gates were opened to a select few park-goers as a VIP lounge? And what if you could upgrade your Platinum Pass to a “Consulate Pass?”

Photo courtesy of The Coaster Guy – used with permission.

The idea isn’t that far fetched – several parks have hosted hospitality centers for bloggers and other influencers, where they could store items and get free refills and snacks, all away from the crowds. Why not give guests the opportunity to pay for that same, sweet access?

Plus, the pass could add a few other perks, maybe higher discounts for food and merchandise – or even a single fast lane per visit. It’s a Platinum, Platinum Pass.

Since upgrading to a Platinum Pass isn’t worth the cost for most Bay Area folks, with the exception of those who want to go to Knott’s (and I’ve covered that in a previous article) and considering an upgrade from a Gold Pass to a Platinum Pass doesn’t add any more value to a visit at CGA, maybe this benefit might be the incentive people need to pony up those extra bucks. And since we’re here in Silicon Valley, receiving that “premium” experience is not a hard sell.

The Consulate seems frozen in time. Photo courtesy of The Coaster Guy – used with permission

Should it be by invite only? Probably to start. Parks tend to (or should) know their heaviest users and could easily identify probable candidates from common knowledge – or just looking at pass usage data.

What do you think? Would you pay up to get access to the Consulate? How much would you be willing to shell out to step up to the second floor? Let me know in the comments below.

Again, special thanks to Kurt (The Coaster Guy) for permission to use his photos of the Consulate during ACE’s Coaster Con XXXVII!