It is rare in the amusement industry to meet expectations, especially for hardcore park fans. It is an even rarer event to exceed those expectations.

After I experienced Winterfest at California’s Great America this past Friday, I am happy to report that my expectations for this park have been forever shattered, in the most wonderful of ways. 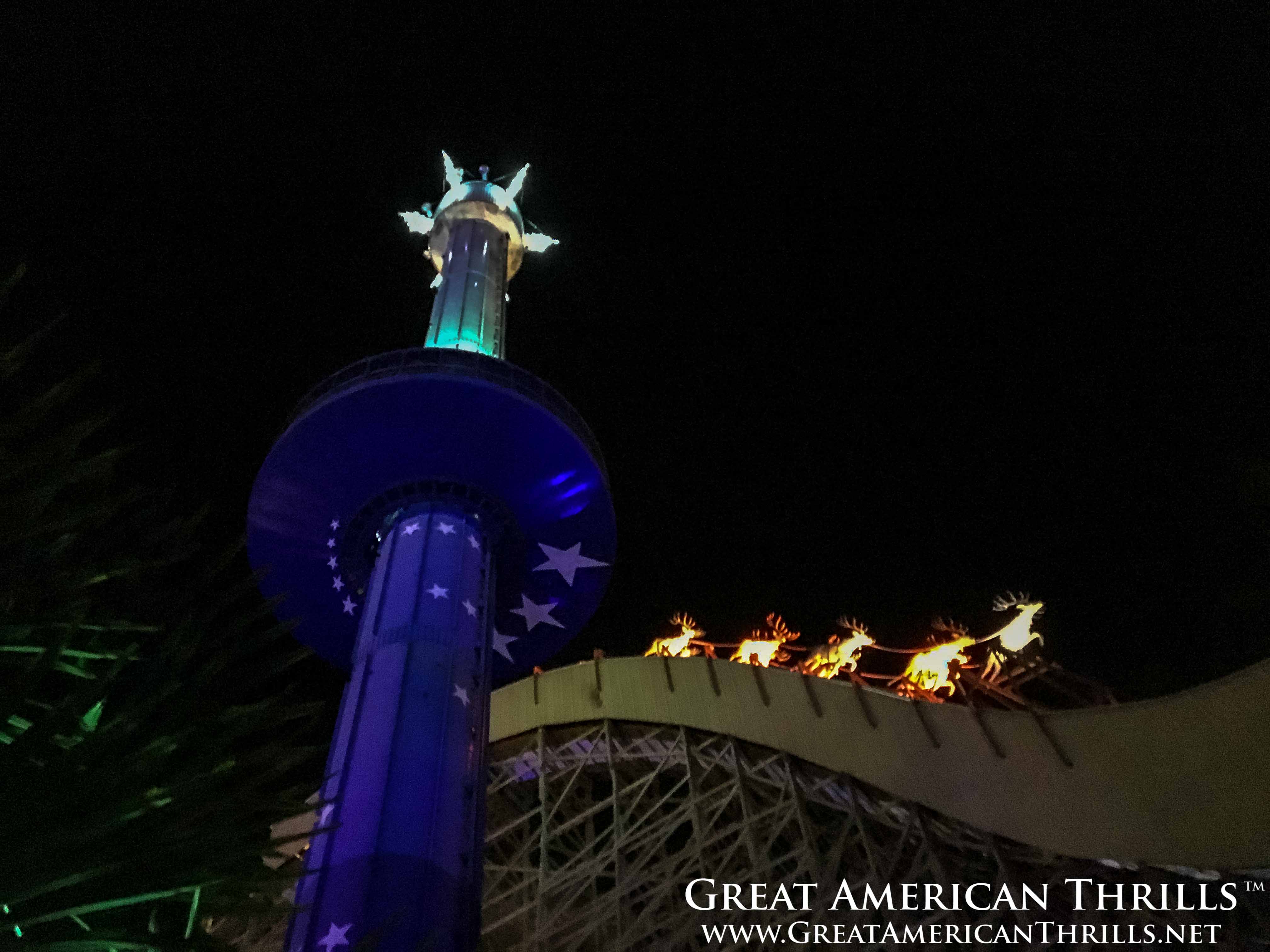 Star Tower has been magically transformed into the North Pole, complete with decorations and a new on-board spiel. 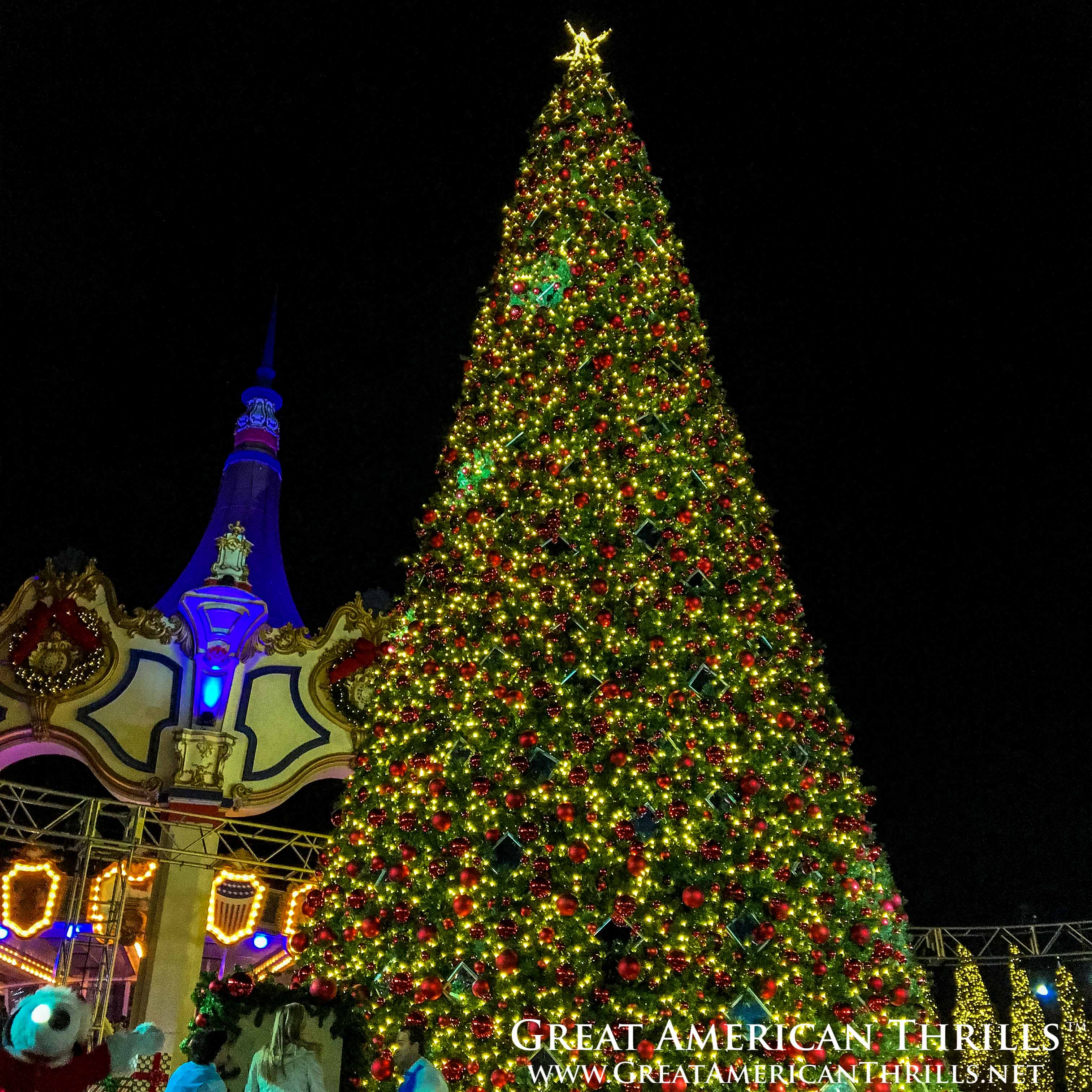 Now, if you live in Santa Clara and find it difficult to get a Christmas Tree in Santa Clara – blame this park – as hundreds of Douglas Firs are spread throughout it. They’re used both as ambiance as well as effective barriers to closed-off sections of the park. The result is quite striking: not only does it look like Christmas, it SMELLS like it, too.

Arguably the most striking feature of Winterfest, this honest-to-goodness ice rink is in the middle of Carousel Columbia’s reflection pond.

If you intend on going skating, check-in first at the Stroller Rental. That’s where you’ll have to fill out the waiver (thanks, California) and if you’re under 18, you’ll need a parental signature to hit the rink. When we first arrived, it was unclear where we had to go to first, so we lost skating time as a result.

Also, you CAN bring your own skates, but the additional fee to skate still applies (I.E. no discount). Just be prepared to get a locker to keep them safe, unless you want to lug them around the park the rest of the evening.

Finally, if you happen to be late for your scheduled ice skating time (it’s given in blocks of 30 minutes) you’ll be given the final skate of the night by default. 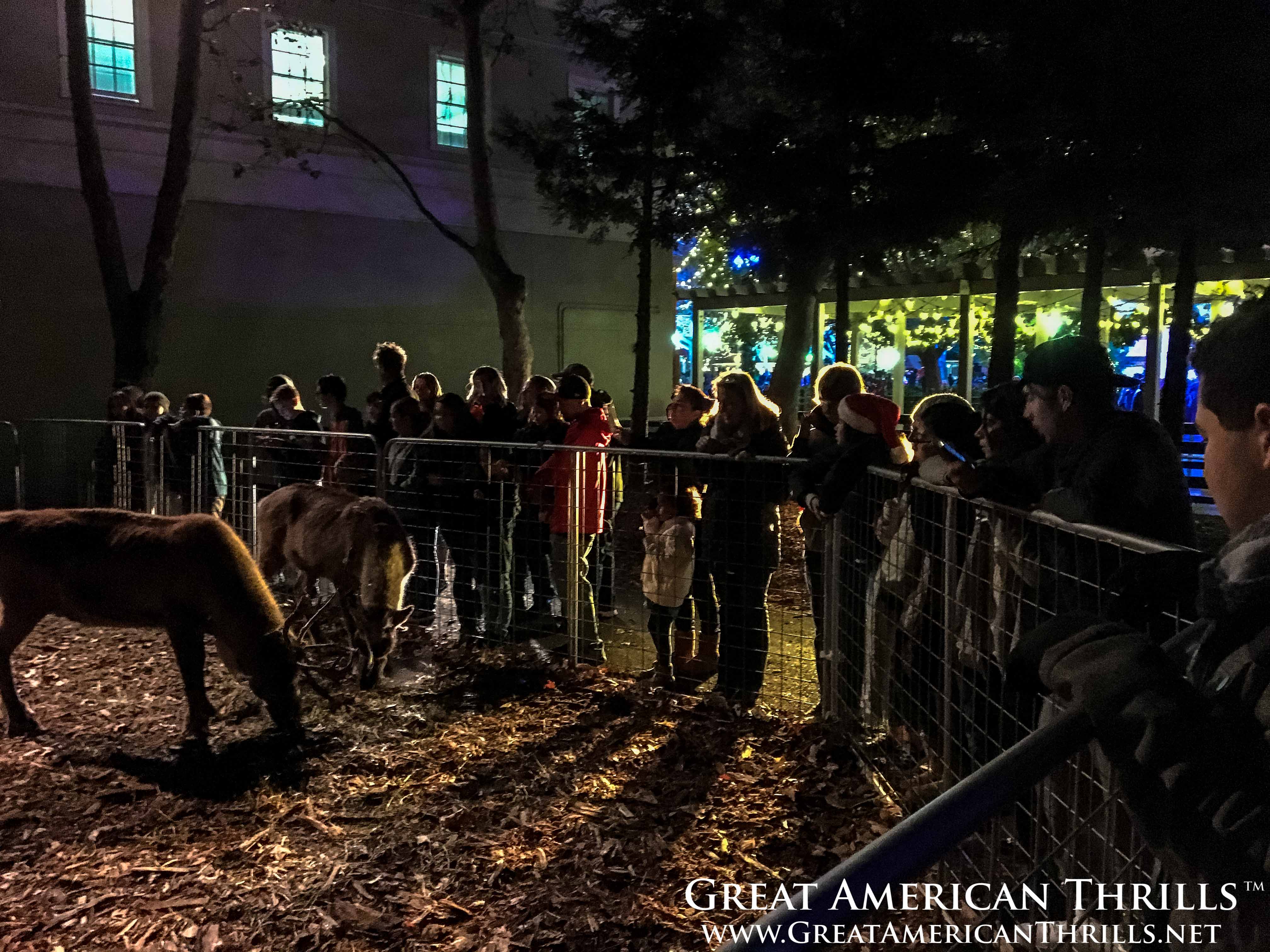 Sitting on the site of the much-beloved “Triple Play” Huss Troika, the reindeer paddock saw consistent crowds all evening long. If you’ve never seen a real one up-close, it’s quite a treat. Listen for the snapping from their hoof tendons as they prance around. The site also provides unique (albeit dark) photo opportunities for the Patriot coaster (nee Vortex) due to open in 2017.

Under the brilliant management of Entertainment Director, Clayton Lawrence, the quality of shows in the park and overall experiences available to guests during Winterfest has met or exceeded those of the Marriott-era.

Yes, I said it. Because it’s true.

As during “Taste of Orleans” – there were characters everywhere – happy to interact with you and your family. There was always a show you could go and see, all with high production value and jaw-dropping visuals. The decorations and lighting around the park brought it to life in a away none of us have seen before. When Santa appeared at the end of the show, the kids in the audience legitimately GEEKED OUT. It was fully immersive entertainment – my God it was a THEME park again. 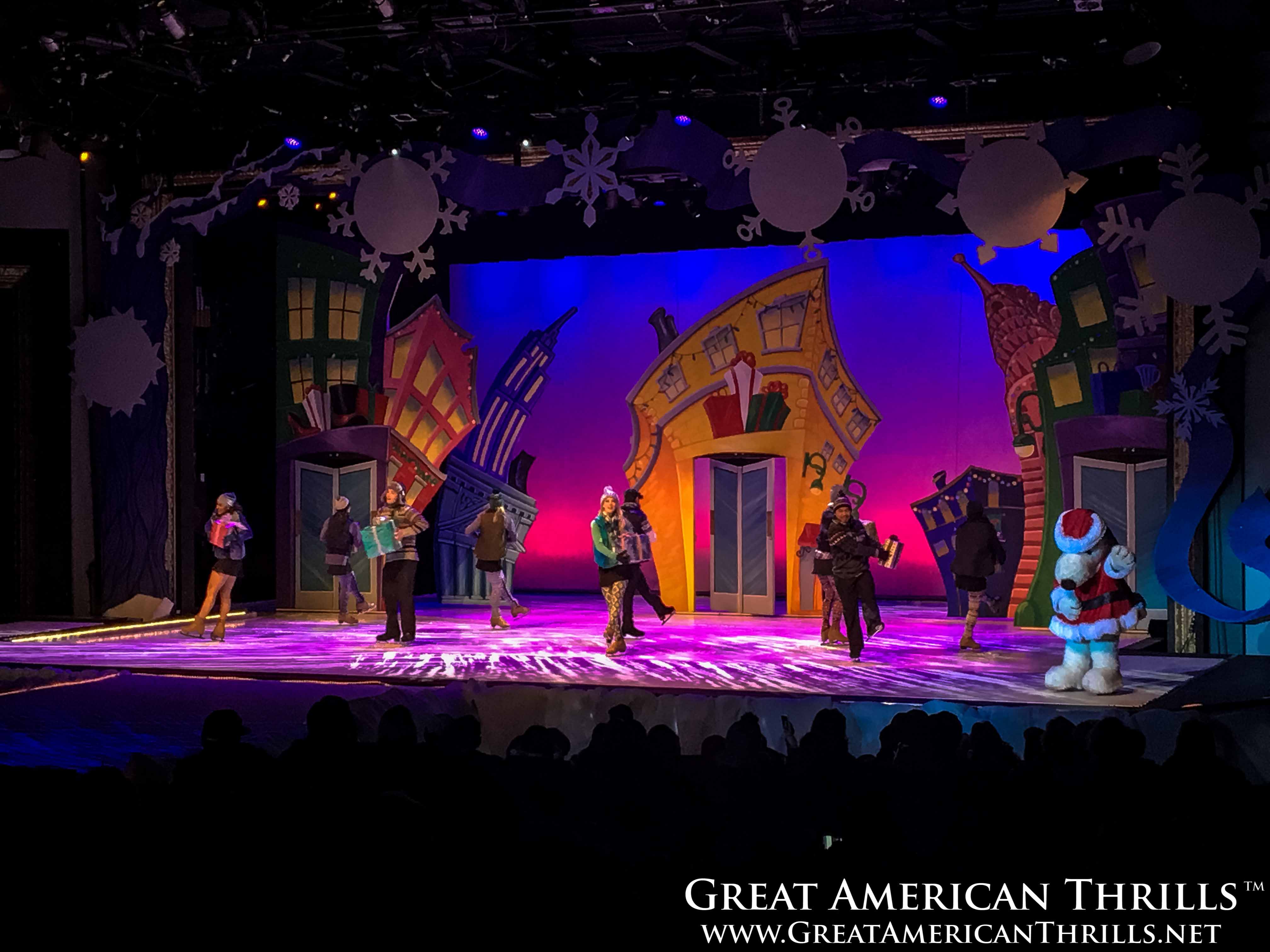 Be sure to get to the shows you wish to see early, as the best seats go fast. Both theatres saw STANDING ROOM ONLY crowds – and that was on a Friday night. Just imagine how packed it could be once the word gets out!

“It’s Christmas, Snoopy” was so good – after Linus’ famous speech on the true meaning of Christmas…people applauded. That tells you a LOT. And to ensure complete inclusion in this holiday event – in addition to a nativity scene, there’s a Hanukkah menorah and Kwanzaa kinara in the park itself.

I have made it no secret my disdain for the merchandise offerings from corporate parks (The 8-car Demon shirt, the California’s Great Adventure Gold Striker shirts) but, I’m willing to forgive my home park for ALL OF THAT, when I saw this:

THIS is what fans want to see in their local amusement park! 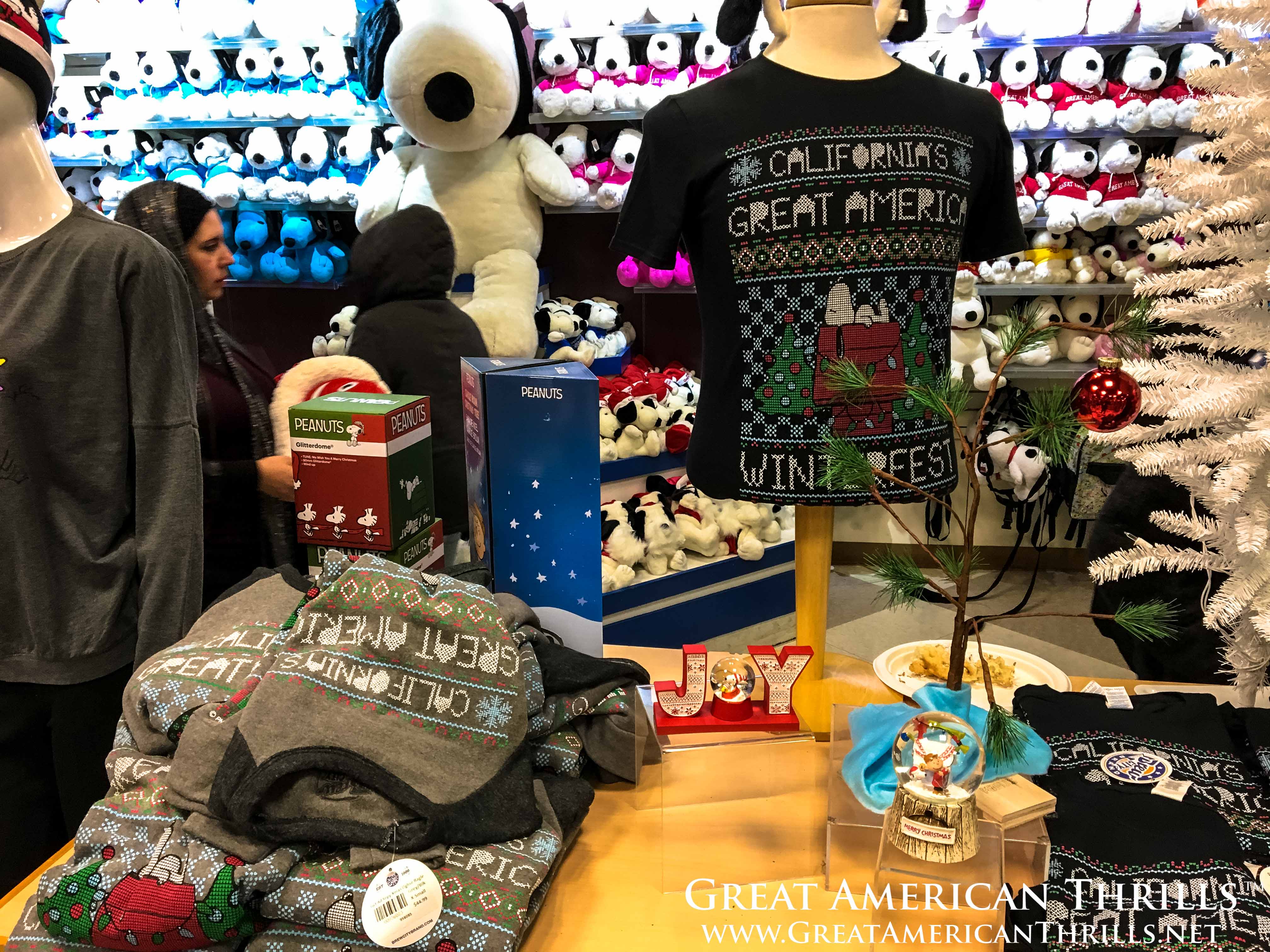 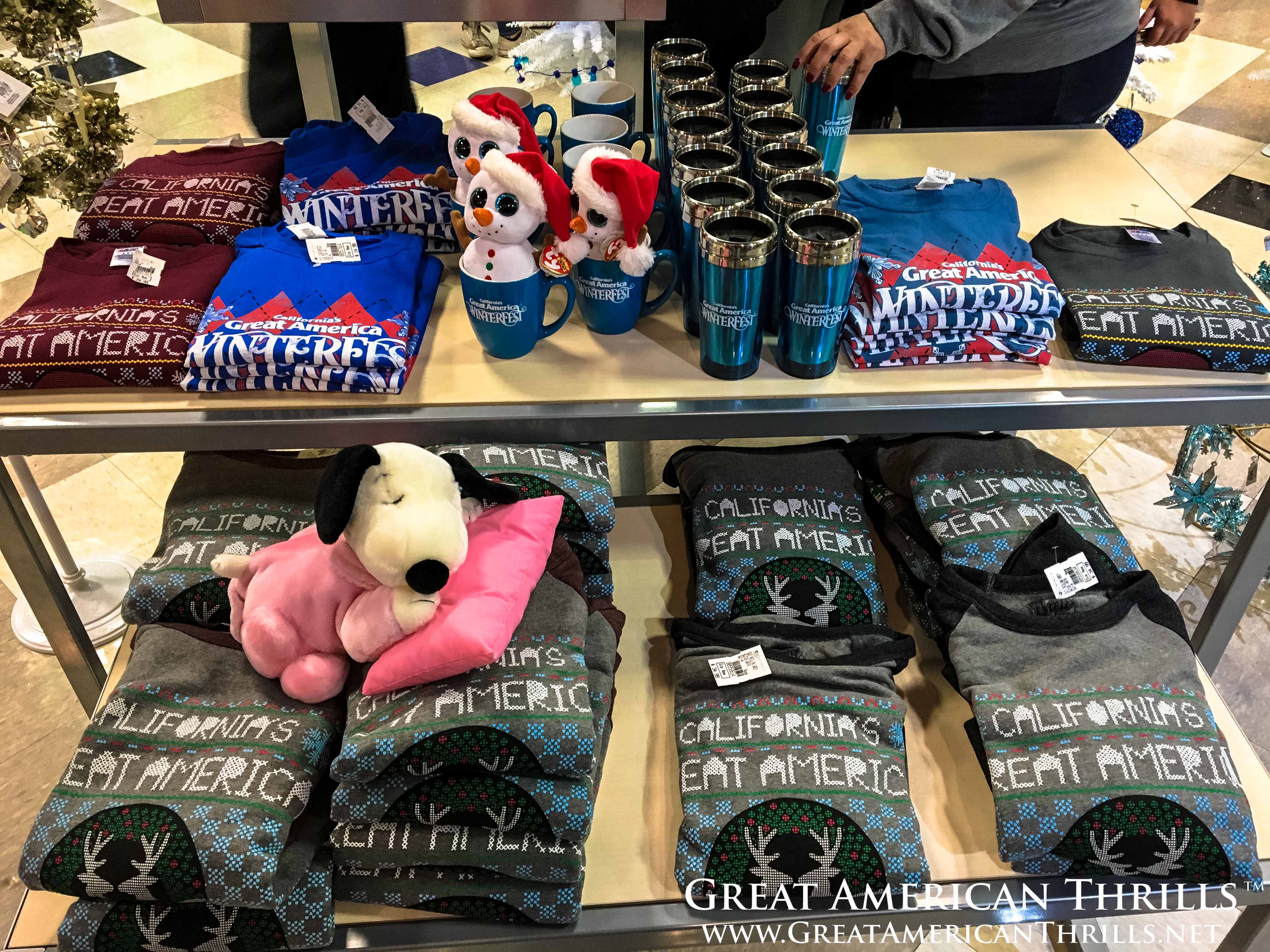 Ladies and gentlemen, that is park-specific merchandise (which is increasingly rare in the corporate park world). It took effort to create and it can only be sold in one park in the chain.

I bought the ornament immediately and look forward to it gracing my tree for decades to come.

Want to make a park fan happy? Just keep making merchandise like this. Don’t keep pushing generic “I ride with Him / Her” shirts. I’ll never buy one of those. But I sure as hell will grab unique pieces like this – and happily hand over my credit card.

Coal in the Stocking:

But, much like Christmas morning, sometimes you don’t always get everything you want. For instance, with all the glitz and lighting around it, Carousel Columbia wasn’t very well lit or distinguishable once the sun set. Just leaving the regular white up-lights with those blue highlights would vastly improve everyone’s front entrance photos and ice-selfies. 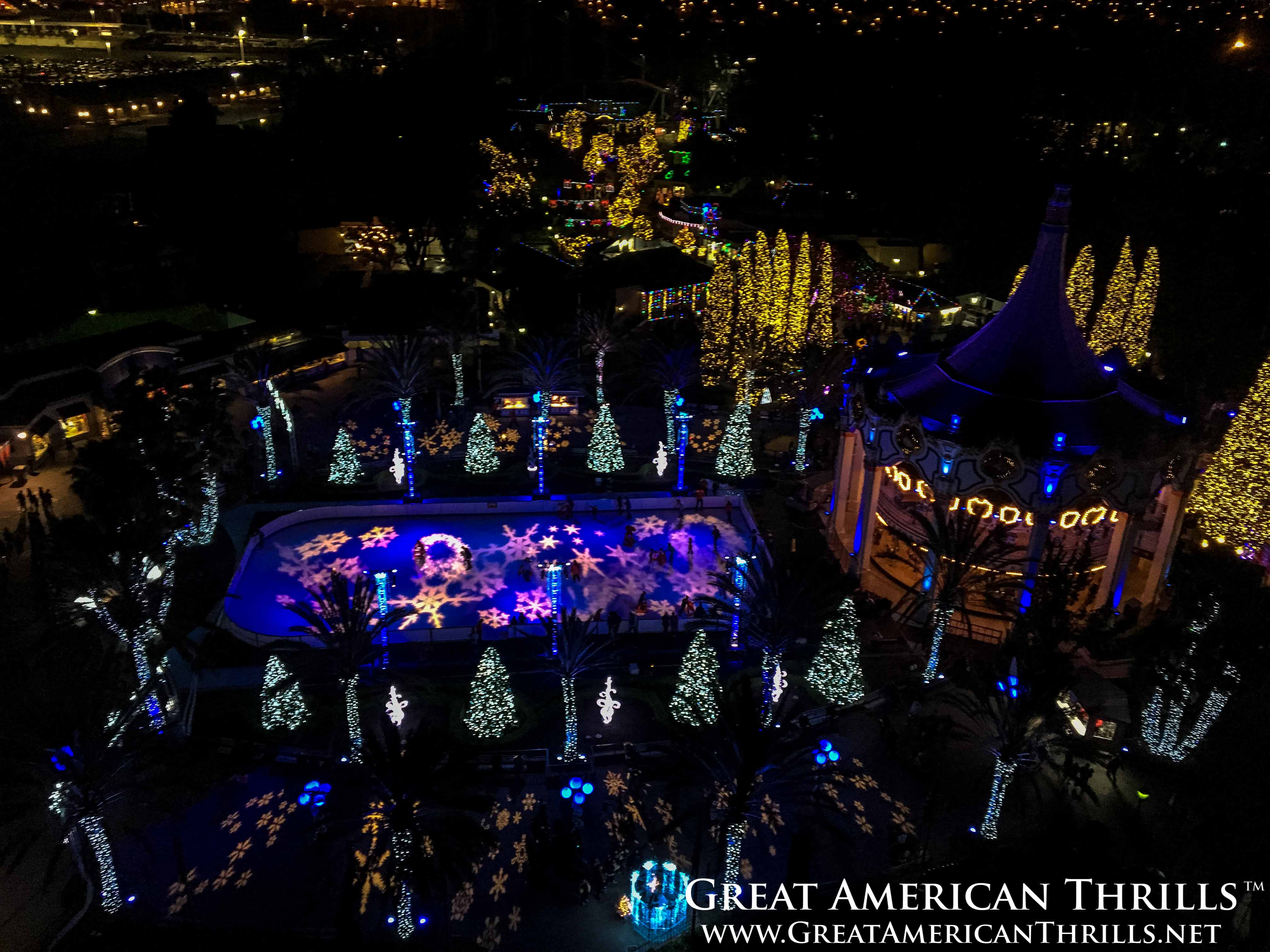 Jaw dropping from Star Tower, but remarkably touch to spot from the ground, Carousel Columbia could use some more lights on the front to stand out better.

Speaking of Columbia, all of the park maps (paper, online and in-park poster) have three errors on them, including the misspelling of the iconic carousel (it’s misspelled “COLOMBIA,” like the country). It’s hard for die-hard park fans to ignore when someone misspells your signature attraction:

Gold Striker and Flight Deck are both on single train operation – which is understandable – given the three and-a-half weeks the park’s maintenance staff has had to do a complete winter rehabilitation (it’s usually several months). But, if you choose to go to Winterfest just to ride either of these e-tickets, expect longer than average wait times (you really shouldn’t be going for the rides, anyway).

Lines for food also seemed to be longer than usual. I’m chalking it up to having the main food service area (County Fair’s Food Festival) not open as part of the festivities. Also, because that and half of Planet Snoopy aren’t open for Winterfest (you’ll walk along a decorated part of the service road instead), the park can feel more crowded than usual, so just be sure to bring plenty of Christmas cheer on crowded nights.

Despite these bits of coal, Winterfest isn’t just worth your time or money – it should be mandatory that every family in the greater Bay Area check it out sometime this holiday season. Winterfest combines everything that other holiday events do in the area (plus coasters and rides) in just one location. It’s worthy of “tradition” status and did I mention there’s a 100% chance of snow? 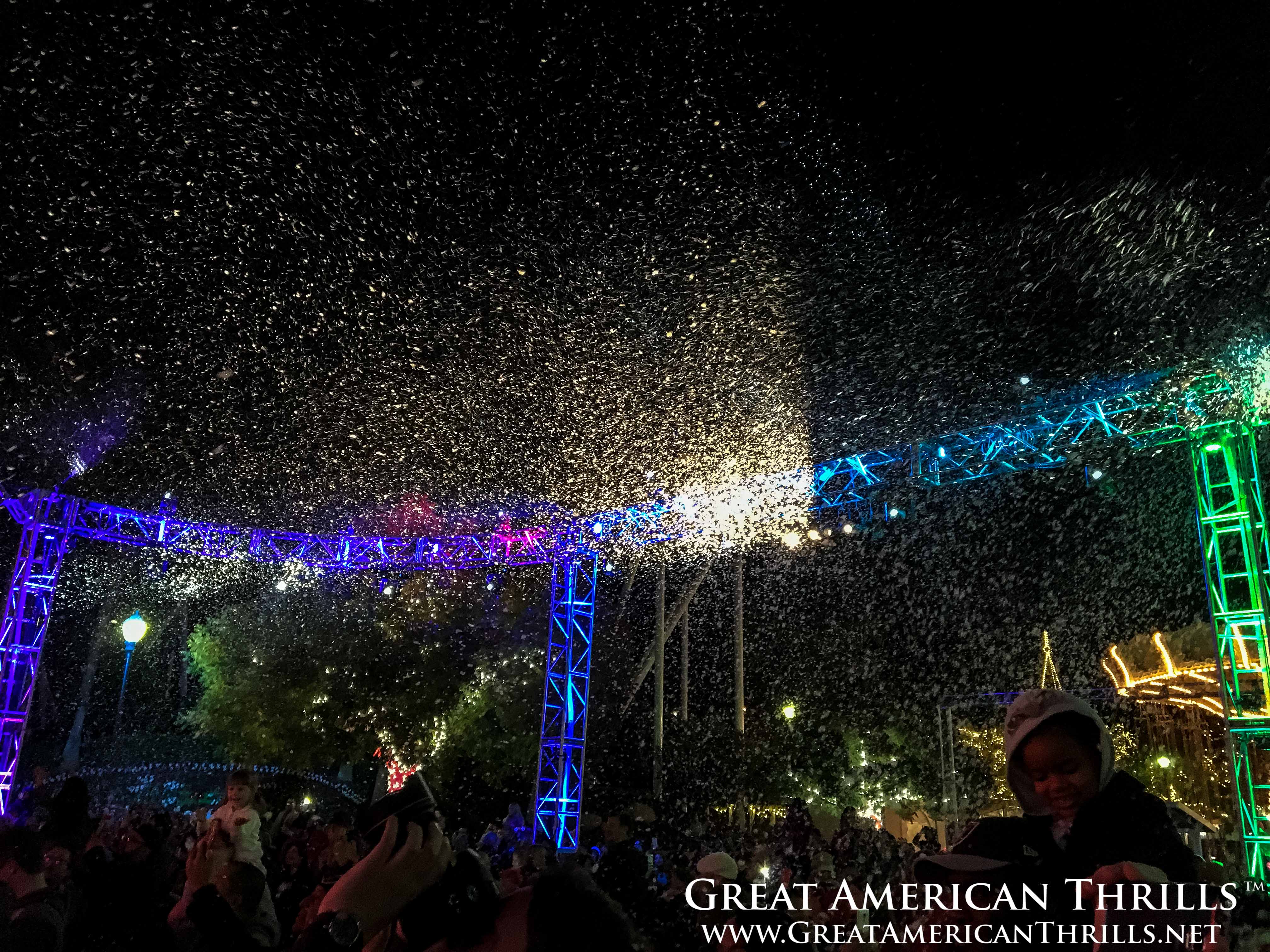 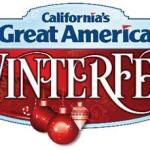 Today, California’s Great America announced “Winterfest” a spectacular larger than life holiday event. The event will be in direct competition with Six Flags’ “Holiday in the Park” which has been running for several years now up in Vallejo. “Winterfest” will be free to attend for anyone with a Gold of Platinum season pass.

It will be capped off with one of the Bay Area’s tallest Christmas trees and even giant toy soldiers greeting guests.

Suddenly, buying a season pass to the park this year got a whole lot more enticing. Certainly the addition of “Mass Effect” wasn’t enough to bring me back for another year –  but this might do the trick.

Now, the park HAS tried something similar in the past – in the first season, back in 1976. Those small rings near Carousel Columbia’s top were to help mount Christmas lights. Unfortunately, it didn’t do so well, mostly due to poor weather. However, with the success of Six Flags’ “Holiday in the Park” in nearby Vallejo – it seems like a no-brainer to capitalize on the demand.

The other major issue is ride rehabilitation schedules. Staying open longer means some rides won’t be ready in late March, when the park opens for its 2017 season. Disneyland has perfected this art with a complete schedule of when rides will be down.

However, no other park has been able to duplicate this, usually resorting to single train operation for a majority of the early-season. We shall see how this park is able to handle the lack of time for annual rehabs. 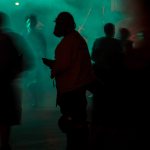 Halloween is upon us – and for fans of haunted events, such as the “Halloween Haunt” at California’s Great America, or “Fright Fest” at Six Flags Discovery Kingdom – the parks are slowly tearing down the mazes and decor, in anticipation for a new season to begin in earnest in March (Discovery Kingdom stays open year-round.) 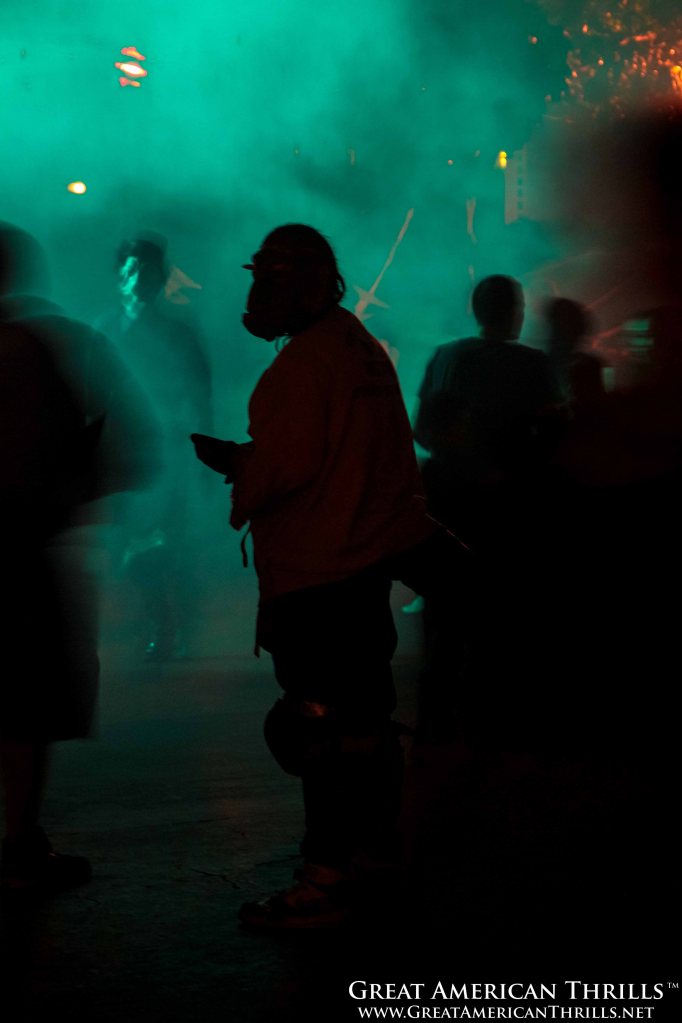 Haunt may be closed – but that doesn’t mean we can’t relive it!

So let us remember the zombie scares, the clownish stares, the frightfully fun times. Halloween comes but once a year – and now for the scaredy cats, there is no more need to fear anything here.

Unless you hate the holidays…