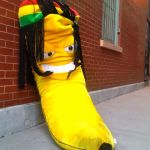 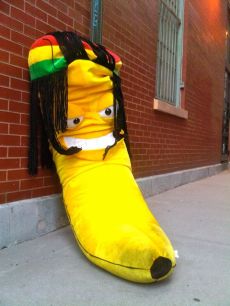 This “Rasta Banana” was worth so much to a man, that he blew his life savings trying to win it.

If there were a dumb guy Olympics, this dude just ran away with all the medals…

Henry Gribbohm claims that at a recent carnival he attended, he lost $2,600 playing a game called “Tubs of Fun.”

And you thought carnival barkers were good at stretching the truth.

In the game, contestants attempt to toss balls into a tub. Apparently, Gribbohm had been practicing the game at home for weeks before the fair – but when it was game time – the results weren’t so good.

Considering the game offers one of the largest prizes at the fair, it should have been fair warning that this wasn’t going to be a cake walk. Predictably, all of Gribbohm’s attempts failed.

But that didn’t stop him, no sir. According to Gribbohm, he kept trying to win back his money by going double or nothing, something that even a carnie wouldn’t dare try (Especially considering that’s gambling!) He also claimed that because he was causing such a large scene and drawing in people, the operator of the game, “…promised me a Xbox.”

“He dropped $300 in just a few minutes and said he went home to get $2,300 more and soon lost all of that as well,” according to a local TV station.

“It’s not possible that it wasn’t rigged,” he said. “For once in my life, I happened to become that sucker.”

Understatement of the century there. You think they just give these quality items away?

Apparently, Gribbohm went back the next day to complain and the man running the game gave him back $600 – which at least validated his claim that he did spend wayyy too much money on a giant banana.  Despite getting back $600 that he never should have, he still filed a report with the police.

Gribbohm said that he’s considering a lawsuit. I wonder if he realizes that he can’t win there, either.