Are Social Media Influencers Good Stewards of your Brand? 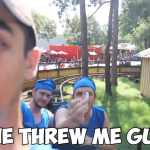 You hear about them all the time, these so-called “social media influencers.” They’re people or groups with massive amounts of followers or subscribers online who get paid to appear at locations or promote products in their feeds. The hope from brands hosting them is that their popularity garners tons of positive publicity in an otherwise crowded media landscape.

This week, Six Flags Over Texas opened themselves up to a group of YouTube Influencers, hoping to drum up some good publicity and positive coverage. Sadly, it appears they got neither.

The Arlington theme park hosted YouTube celebrity “Mr. Beast” – whose real name is Jimmy Donaldson – for two days. His goals? To win every prize in the park and give $20,000 to whomever on his crew could ride a coaster the longest.

Unfortunately, the first video featuring the park’s many, different games exposed a little secret: not all of the prizes shown at games can actually be won.

They’re referred to as “display prizes” throughout the video by employees. So while you definitely can’t win those prizes, you can definitely pay to play said game under those prizes. That just seems like false advertising to me.

That alone wasn’t a good look for the park, but 17 million or so views later, “display prizes” at Six Flags are now definitely in the public domain. Now, that’s not to say other parks or chains don’t do the same thing, but that doesn’t make it any more right to do in my humble opinion.

But that’s not the worst thing to come out of these appearances, sadly.

In the second video uploaded, Mr. Beast and Crew rode the park’s Mini Mine Train, with the promise of whoever survived the longest would win $20,000.

Good work if you can get it!

Now, if you can get past the fact that Mr. Beast is standing in the danger zone as a train is being dispatched:

You’ll then get to these truly jaw-dropping moments: when the team encouraged young on-lookers to toss them small food items while they were on the ride:

Now, credit given where it’s due: the team does not start the food tossing conversation – a guest did – but the influencers encouraged it.

Also, the team does acknowledge in passing that, “…we’ve started a problem,” and that it, “…probably wasn’t a great idea.”

That being said, the very next scene featured a team member openly asking if they could, “…come back with an Xbox on the next trip?”

That was immediately followed with a scene featuring another team member, holding a loose t-shirt dangerously close to the ride’s moving wheels, tossing it from the moving train to the crowd of on-lookers on the other side of the safety fence:

Anyone else seeing some mixed messages here in the edit? Imagine if you’re one of the channel’s younger, target audience. Does a passing warning even register with them?

What’s truly befuddling is that all of this could have been entirely prevented. It appears the park had no say in the final edit of the video – which is unfortunate. Scenes like these should have never seen the light of day, let alone be allowed to occur during filming.

In an ironic twist, while the two videos have received a combined 37 million views (and climbing), the park (actually just the Six Flags brand) received a total of *one* direct mention across both videos. Unless you recognized the park from a previous visit, you’d have to do some serious sleuthing to figure out where the heck this place is.

Consider the amount of resources that were needed to pull off these shoots and you have to ask the question, “Did the park get the most for their money?”

With all that being said, the park ended up looking like a victim and got the very raw end of the deal. Not only were they barely mentioned, they were shown featuring prizes you can’t win and had their safety rules flaunted, captured and broadcast to millions of young subscribers (the company’s core market).

Mr. Beast, on the other hand? They got two new videos, 37 million+ new views and tons more ad revenue. Is this a fair trade?

Influencer Marketing is a fast growing sector, with more and more brands leveraging it as an additional tool in their marketing toolbox. Incidents like these are a good reminder that just because someone says they have a lot of “influence,” and wants to “work” with you, doesn’t mean you should sacrifice the image or safety of your attraction to get it. 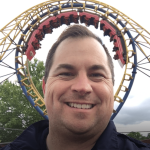 Hey everyone! It’s been awhile since we last talked. Two and a half years, to be precise.

No, it wasn’t you – it was me. A necessary hiatus what with me taking a position in the Communications Department of a major theme park here in the south.

But as of this week, that restriction have been lifted, so you’ll be able to expect hearing from me on a semi-regular basis once again.

You’ll also be seeing some changes to the site over the next few months, with some new features as well as a new look. I’ll be sure to keep you all up to speed as we transition back into regular programming.

It’s been a long two and a half years – we’ve got a lot to catch up on.

But, just to be safe, let’s not wait that long to talk to one another ever again – okay? 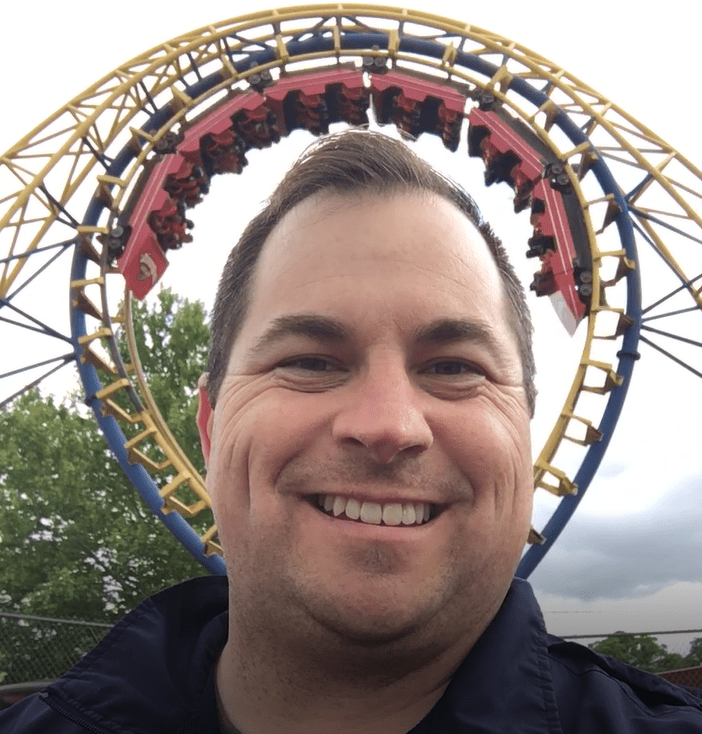 Kris Rowberry is back at Great American Thrills! 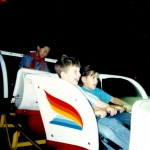 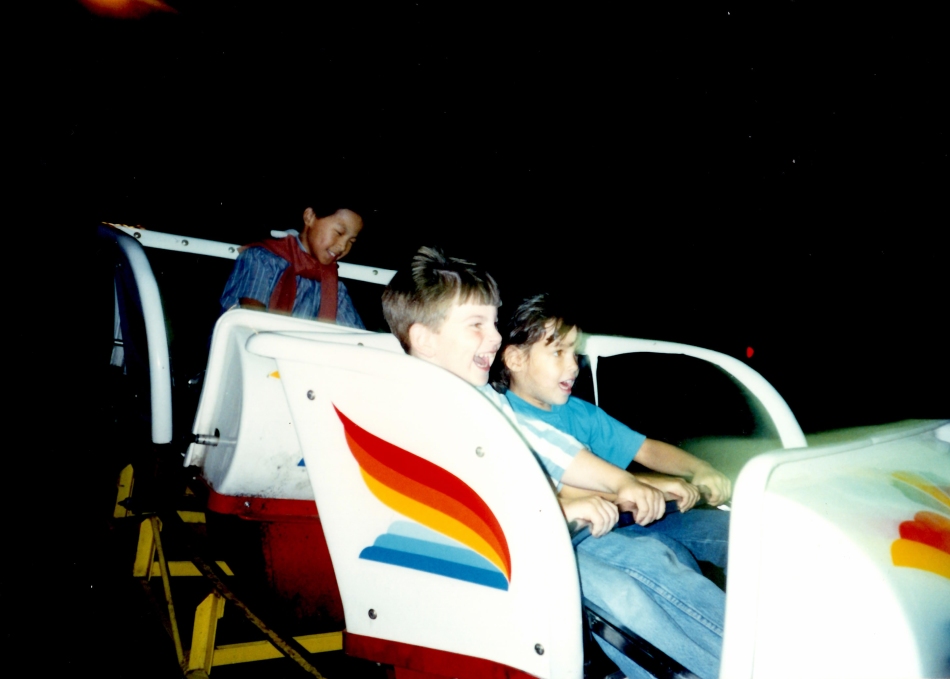 At the Santa Clara County Fair!

If this photo doesn’t capture my love of amusement and theme parks, then I’m not sure what photo could… 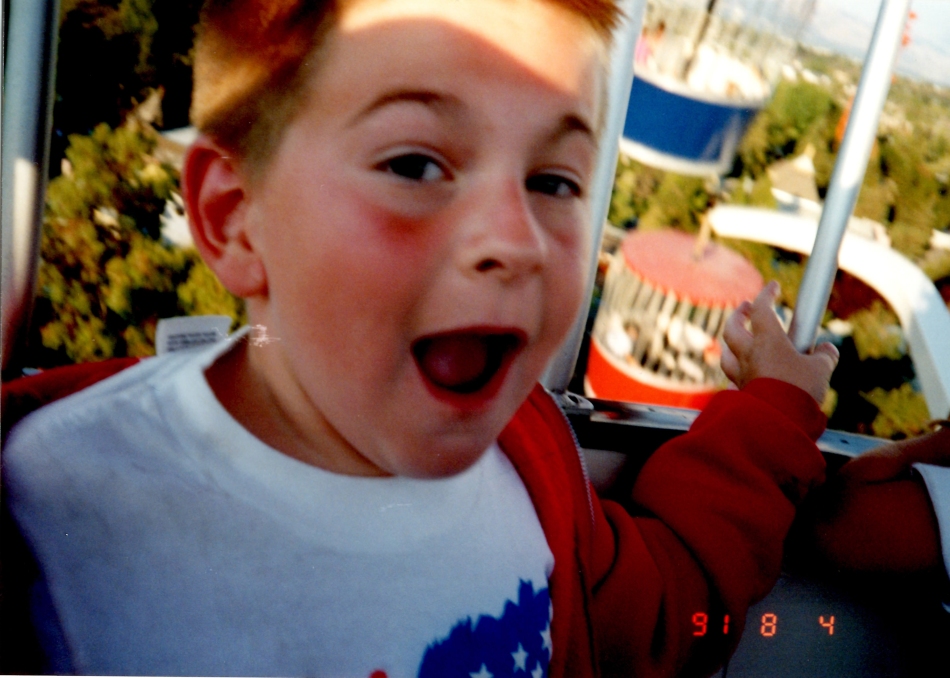 Two defunct rides in this picture – can you spot the other one?

Yours truly on the venerable (and sorely missed) Triple Wheel at Great America in Santa Clara, CA. Here’s hoping it brings as much joy to you as it did to me finding it in an old photo album.

For those wondering what the ride looked like that I’m pictured on, this great video from GreatAmericaParks.com should help you out – the sound ALONE should spark your memory:

Five Ways To Be Arrested in an Amusement Park 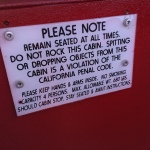 Nobody’s perfect – we are all human, after all. But there are several ways you can mess up BIG TIME at your local amusement or theme park and end up in the county jail. If you think those rules at parks are for chumps, you better read on and start taking copious notes.

Here’s five ways you can get carted away to jail for misbehaving at an amusement or theme park: 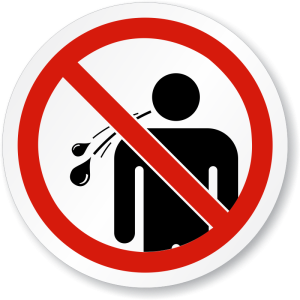 The quintessential bad adolescent behavior! In addition to being a serious health hazard, spitting off of a ride (such as a sky ride) and hitting another person can be prosecuted as assault. Plus, the park can revoke your ticket or season pass as well. 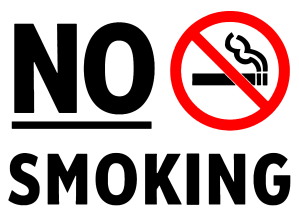 In many places around the country, smoking is being banned in all public places, including parks. Many have set up so called “Cancer Corners” to keep people from smoking directly on the midway. But in some places, you can be cited for illegally smoking – and it can carry jail time in some of the more strict interpretations of the law, especially here in California.

We have rules for a reason – usually because someone before was dumb enough to warrant making one!

Much like a Flight Attendant, a Ride Operator knows much more about the attraction you’re about to ride, despite their age or attentiveness. Purposely disobeying an order from them can not only land you in the hospital from injuries, but can also get you in the slammer for failing to heed posted rules and regulations. 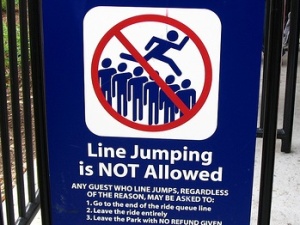 Ah, the scourge of park attendees worldwide. But did you know that California has a specific Penal Code dedicated to line jumping? California Penal Code 490.6 gives parks’ the ability to detain you for jumping the line, until the police show up. That’s one way to make your wait times much LONGER, rather than shorter. 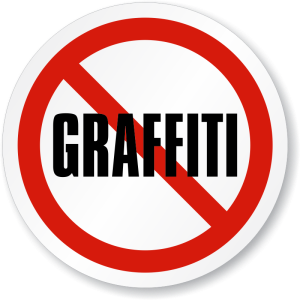 This should be a no brainer, but amazingly, you’re not allowed to write on things that aren’t yours – especially private property. Of interest lately is people tagging their Instagram or Twitter accounts…because nothing makes the police happier than you telling them exactly how to find you to prosecute you.

By now, you must be asking yourselves: “Wait, you cannot possibly be serious in saying or implying that people get prosecuted for these, can you?”

Well, hate to break it to you, but I am serious – and I’ve seen it happen. Working for several parks in my career, I’ve seen everything from spitters being arrested, to taggers being tased. In fact, more people than you think are removed from parks every day, and some of them end up making the trip wayyy downtown. Remember that parks are supposed to keep out the “outside world” and keeping up that illusion is part of the services the park offers. Trust me, just follow the rules and you’ll make everyone’s day better!

What do you think? Which person behaving badly would YOU like to see removed from a park for one of these offenses? Tell us on social media or comment below!

What’s the Difference Between an “Amusement Park” and a “Theme Park?”

You hear the phrases “amusement park” and “theme park” thrown around all the time. But what exactly makes a park one or the other? It seems like the two terms are interchangeable at times – but in reality, they’re two completely different experiences.

This week, Six Flags Magic Mountain was named by USA Today as “America’s #1 Theme Park” – but is it really themed like a Disney park is? (And it should be noted, that the “contest” was a user poll) Heck, there’s even parks that called themselves “Themed Amusement Parks” – we’re looking at you, California’s Great America.

Theme parks generally have specific areas that work together with the rides and attractions to form a cohesive theme.

So then, let’s define exactly what makes an amusement park and theme park – and start using the phrases correctly, shall we?

FAIR / CARNIVAL – Any non-permanent installation of a group of rides and attractions that typically travels in a geographic area.

AMUSEMENT PARK – Any permanent installation of a group of rides, with or without a gated entry. Single rides may be themed to specific topics, areas or storylines, but a cohesive theme(s) is/are not seen in the park as a whole.  Rides tend to be judged based on statistics and “thrill factor” over immersiveness of the experience.

THEME PARK – Any permanent installation of a group of rides and attractions themed after specific topics, areas or storylines. At no time is the illusion of theme dropped while inside the park gates (I.E. everything must have a cohesive theme, not just one ride). Rides are about immersing guests in an experience, not necessarily as thrilling from a statistics standpoint.

What are your thoughts on my definitions? I’d love to hear from you!

Leave a comment below or write to me on social media – let’s keep the conversation going!