This is guaranteed to be the craziest, most awesomely bad (yet good) idea you have seen today, possibly for the rest of the year.

A gentleman by the name of Jonathan I. Gordon of Stamford, CT took an idea that so many roller coaster enthusiasts have joked about for years – and actually went through the process and cost of patenting it with the United States Government. Behold, the patented “inverted wooden roller coaster” in all of it’s glory: 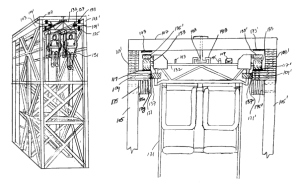 Now, the reason so many coaster enthusiasts balk at the mere idea of this is simple – it would be a maintenance nightmare, very inaccessible for crews to inspect and repair – and incredibly uncomfortable – but that doesn’t mean you can’t patent it! Someday – a manufacturer might be just crazy enough to attempt this, and when they do, Mr. Gordon will be receiving royalties for his foresight to patent this insane idea.

It’s one of many ideas that you’ll find with a search of the patent office that are amusement related. Some, more thought out than others – but all are creative and help move the industry forward.

Here’s the official patent office link to the inverted woodie, so you can bask in all of it’s amazing-ness. This ranks right up there with the Bridge Coasters proposed for the 1939 World’s Fair…what do you think? Tell us on our social media pages, or comment below!