With gasoline expected to hit $5 a gallon this summer, it’s no surprise that that smaller, regional theme parks will see a significant jump in their attendance this year, while the larger, destination parks will see a hit (a la 2008, when gas spiked over the summer as well).

The difference between these two scenarios, however is the cost and fragility of the economy. Sure, we all want to give our families a good time, but in the back of our heads, we’re all still worried if our job is going to be there when we return from our vacation (Funny story – back in 2009, I went on vacation and returned to find out I had been laid off…so I know what I’m talking about here.)

So how then, does a family of four save money at their local amusement park while not skimping out on the experience? 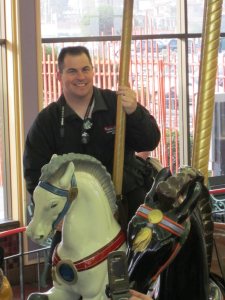 Our host on the Looff Carousel in Santa Cruz

Sounds simple, right? but when you’ve got a few caffeine-filled kids running amok down the midway, it can be difficult to pace yourself. So start your planning NOW for trips, especially if you plan on driving any significant distances to visit a theme / amusement park.

I calculated that back in 2008, when gas was (at that time) a record cost, I ended up SAVING the amount I spent in gas for my 1400 mile road trip just by thinking ahead and purchasing season passes “with benefits,” most notably, a parking pass.

Because I visited several parks owned by the same chain, I never once paid for parking or admission at full price.

So with prices as low as they’ll be at the start of the season, my first tip to save you money at your local park is to seriously consider those season passes, especially if you’re planning on staying close to a park this year. It could save you a ton of dough! Don’t forget about adding extras too, such as meal plans or parking. Yes, it’s more money up front, but consider this: it’s an investment in six months of fun up front. Spread that out over that time and you end up saving money over paying for items (such as parking) individually.

“Is packing sandwiches in the car REALLY saving you money on theme park food?”