Call me “Grandpa” if you must, but there’s a ton of things that just drive me nuts with the whole amusement park and roller coaster “fan” community. So here’s my picks for the the top five things we’ve got to stop doing in 2015:

I get it, you’re trying to drive engagement to your profile. But damn it’s annoying as all hell to see a “battle” of two or more rides that are usually “apples to oranges” in terms of comparisons-sake taking up my entire screen while I’m just trying to see some beautiful photos. Speaking of photos on social media…

4.) Stealing Each Others’ Photos / Videos:

There’s a reason when you search for photos in Google there’s a small disclaimer at the bottom. It reads: “This image may be subject to copyright.” So what does that mean? In short, it means you need to get permission to use the photo or follow the rules for using it as defined by the author (Creative Commons 3.0 is a good example of this).

So while it’s so easy to right click a cool photo and drop it into your social media feed (Facebook, Instagram, Tumblr) you better do some research to ensure no one owns the rights to it first – or you could be sued, and sued for each time it was reproduced (i.e. “shared”.) You wouldn’t want someone stealing your term paper and calling it their own – so why would you steal someone’s art and not attribute it.*

*Fun fact: While attribution is good, it does not completely absolve you from copyright infringement lawsuits. The easiest solution? Just go out and capture your own photos / videos.

Oh, and if you DO get caught – just fess up to it and fix the situation. No one likes a sore copyright infringer.

Seriously – as cool as you think it might be to fly over a park, the lawsuits over damage, etc. don’t make it worth it.

With UAV’s (commonly known as “drones” becoming more and more prevalent (as they become cheaper), the temptation is there to do some really nefarious things with them, such as flying over closed parks without permission to spy on construction progress, or worse, fly over the general public without asking first).

While these amazing devices have given us incredible perspectives on parks and rides recently – the world isn’t quite ready to see them flying overhead while families are trying to enjoy their day. Plus, most pilots are not up to par with the pilots they see on YouTube – at least, not yet.

They’re also a major insurance liability to the park and yourself (seen all those drone FAIL videos? Now imagine them over a crowded midway) not to mention the serious, Federal / FAA violations you could be racking up – so just leave the DJI Phantom II in the hangar for now – okay?

Loose articles can ALWAYS come loose – keep the camera in your pocket and ENJOY THE RIDE!

These things are bad enough off-rides, do we really need to capture every waking moment of our lives on RIDES and then upload them? Plus, once that stick / camera / phone gets knocked loose and whacks some unsuspecting guest below – good luck explaining yourself to the judge & jury in the civil & criminal lawsuits that are sure to follow.

1.) Arrogance in Parks and Online:

Unless you’re the GM or other high-ranking manager of a park, you’re not allowed to walk around your local park or on the internet like you’re a God on the subject (myself included). Begging for perks, exclusive experiences etc., just because you belong to a certain “coaster club” is not only beyond arrogant – it’s counterproductive to the entire community.

All it takes is ONE PERSON to act like an enthusi-ass at a park or TOWARDS a park – and it will ruin the fun for the rest of us. Think of that next time you’re bad mouthing a park via social media or claiming to know everything to the “GP” the next time you’re out on the midway. Remember our passion is all about having fun – not making other people miserable in the process…

What are your thoughts? Got anything to add to this list? Leave me a comment below or on our social media pages:

Flying a Drone over an Amusement Park – Good Idea?

With the advancements in UAV technology over the past few years – coupled with the explosion of video online – it’s no wonder these devices are becoming increasingly popular. But, before you go off buying and flying one of these incredible devices at your local park – know what you’re getting into first… 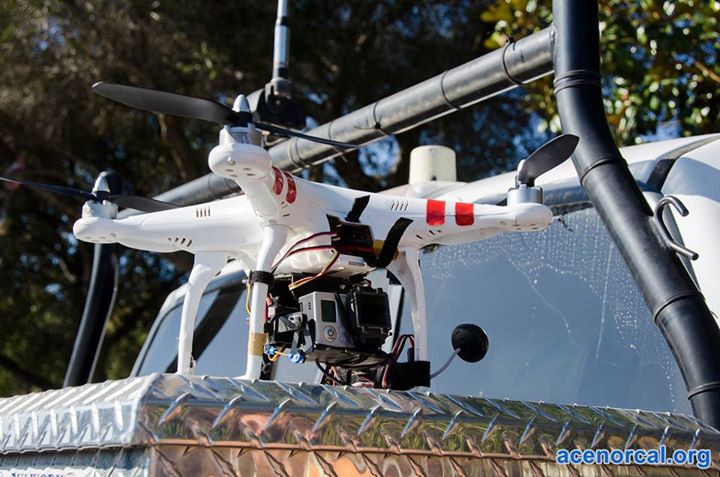 1.) Flying over anything is inherently dangerous – gravity ALWAYS wins:

Many people don’t realize that when you’re flying, you’ve got several pounds of equipment hovering over other people’s property and / or selves when you’re flying. That payload can strike someone or something at damaging velocities. One doesn’t have to look far to find plenty of spectacular drone crash videos.

A dead battery, gust of wind, or unexpected obstacle could spell instant disaster for your aircraft, and serious injuries or worse to anyone below. Know that if you cause damage to a park employee, guest or ride as a result of your UAV – they’ll be calling you to recoup the damages – and it won’t be cheap.

There are also significant airspace restrictions to be aware of, too – as you’ll soon see…

2.) Getting permission from a park to fly over is ALWAYS the best move:

Don’t be like this guy and cause a panic amidst Disney security and guests – while it should be common sense knowledge – you DON’T fly over a park that already has major security protocols in place.

Make whatever argument you can (“The Ferris Wheel was closed,” or “FAA says only MANNED aircraft aren’t allowed over”) the fact remains – flying an unmanned drone, without telling anyone is begging for panic and unnecessary resources diverted away from real emergency situations. There are reports everyday of people shooting these aircraft down – not informing someone you’ll be in their space sets the wrong precedent and reflects badly on the community as a whole. You wouldn’t jump over a fence for a photo update – so how is flying over at low altitude any different?

ALWAYS ask ahead of time and more importantly, HONOR the decision – even if it isn’t what you wanted.

3.) Privacy rights may not be set in stone, but there are common sense limits:

Fences are there for a reason – it’s to keep people out. Flying over construction sites, while a cool perspective at low altitude – can be considered an invasion of privacy. Now, this is where it get’s muddy…at what altitude is too low? Aircraft are required to stay at least 1,000 AGL (above ground level), but drones aren’t quite aircraft – they’re considered “model aircraft” by the FAA at this time. That means they cannot exceed 400 feet AGL. But the privacy barrier isn’t set in stone.

4.) Commercializing (monetizing) your drone video requires more than just a click of the mouse:

When you monetize a video on YouTube, you’re certifying that you own all the rights to the video, you made it yourself and you had all the necessary paperwork to allow it to be commercialized. This means getting insurance, paying all location fees oh – and GETTING PERMISSION TO FLY IN THE FIRST PLACE! When you monetize a video online, you’re making money off of it – which makes you a commercial film producer. There’s far more work that needs to be done as a result…

So, to recap – while UAV’s (drones) offer incredible angles once reserved to just airships / helicopters – it comes with great responsibility to ensure the safety and privacy of everyone involved, including the parks you’re considering a flyover of. Know what you’re getting into before you fly…

*FULL DISCLOSURE: “Great American Thrills” and “Lost Parks of Northern California” utilizes UAV (drone) footage in our work, following all recommended practices, under the supervision of trained professionals and with permission of property owners.