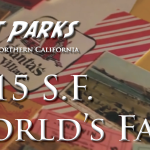 Yes, it’s been awhile since our last episode of “Lost Parks of Northern California” but I can assure you – the wait is worth it.

Presenting the first teaser trailer for our next episode, the 1915 San Francisco Pan Pacific Exposition (World’s Fair). We expect to wrap on the episode and debut it before #CoasterCon this summer.

If you’re a fan of amusement parks, roller coasters, history, organs and trains  – you cannot afford to miss this episode!

Follow the journey by searching #LostParks on your favorite social media network!

Looking for a park-related activity this weekend? Why not join the “Lost Parks” crew on Treasure Island, for the 75th anniversary of the opening of the 1939 World’s Fair!

The event is being held in Building One on Treasure Island, the same building that doubled as the terminal to the Berlin Airport in Indiana Jones and the Last Crusade. Learn more about the event, here.

It’s also FREE to attend, unless you live on the east side of the bay – you’ll have to pay the Bay Bridge toll – but only use half of the bridge! Sorry about that…

Many apologies for the lack of updates on the site as of late – we’ve been working several different major projects that have required a bit more of my time and attention. That being said – they’re going to be EARTH SHAKERS when we can release more information on them, so stay tuned!

As for the “Lost Parks of Northern California” – if you follow us on social media, you know we’re already hard at work on principal videography on the next episode – this time, focusing on parks designed to be lost from the beginning – the 1915 and 1939 World’s Fairs of San Francisco.

As you can imagine – there’s a TON of work and locations involved; coupled with our skeleton “staff” of volunteers, it’s going to take a bit longer than other episodes to produce – but if you’re fans of our work on previous episodes, you already know that the wait will be well worth it.

Be sure to follow the journey by searching / using the #lostparks hashtag on your favorite social media account!

Today, the American Coaster Enthusiasts revealed the official design to Coaster Con XXXVII – and I can’t help but laugh – as it’s nearly identical to the REAL proposal to build a coaster on both the Golden Gate and Bay Bridges!

Learn more about the incredible (albeit insane) idea of the Golden Gate Bolt in the next episode of the “Lost Parks of Northern California” debuting in the next few months!

With the event coming up this June in Northern California, we’re all just a little excited to show off just how much we love our parks and our history – let’s ride! 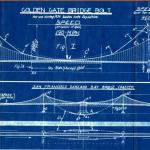