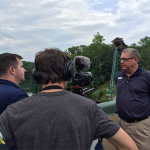 There’s been a subtle, but noticeable trend recently when it comes to “roller coaster videos” online. And we think it’s for the better and far overdue.

While there are some that still continue to tape GoPros to the front of trains and then monetize (commericalize) their work – all without permits or sometimes without park knowledge – there is a growing trend among park fans to elevate the medium to a far more sophisticated level. What do I mean?

Well, check out this awesome, short documentary on Thunderbird at Holiday World:

Coupled with the work of Devin Olson Media, particularly on his “From Dreams to Screams” documentary series – the world of amusement fandom has gone from handheld ride footage to bona fide storytelling:

And we couldn’t be happier to see this trend. So, how can you help elevate the medium? Subscribe to these storytelling channels – while POV is fun, it’s telling a story that leaves a true mark on people.

Shameless plug: “Legacy of Arrow Development” documentary is still scheduled to make it’s debut later this year. Time to raise your game, everyone!