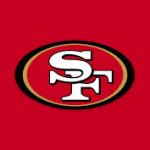 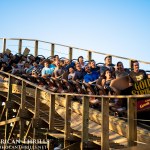 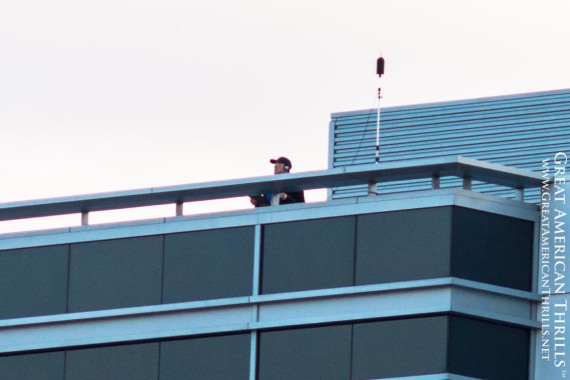 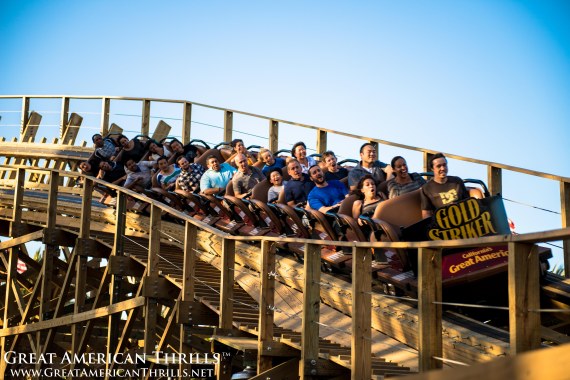 With Gold Striker now officially open to the public at California’s Great America – enjoy this on-ride video of myself and “Lost Parks” Producer, Nicholas Laschkewitsch (who is also the ACE NorCal Asst. Regional Rep) taking in a ride.

Yes, it’s official. As of this afternoon, the Gold Rush has officially met your adrenaline rush – GOLD STRIKER at California’s Great America is now offically OPEN TO THE PUBLIC!

Look for a full media review in the next few days – but for now, get out and enjoy Gold Striker at California’s Great America!

Gold Striker is officially open to the public! 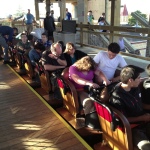 That’s the word most people were saying after they got off Gold Striker this evening. While not open to the public yet, California’s Great America invited people, including yours truly, to come out and participate in a promo shoot for commercials and still advertising. 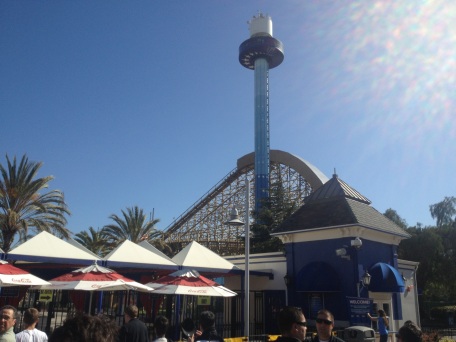 Gold Striker looms large over Carousel Plaza and the front entrance to the park.

Folks, this ride is the REAL DEAL and is setting up to be a real “sleeper hit” across the country. Most people know Great America as a park that seems to enjoy removing rides rather than building them. Gold Striker might just make you forgive them (maybe).

The fun starts before you get to the lift hill (that’s right, BEFORE you get to the lift hill!) Folks in the rear seats will appreciate the incredible whip of the turnaround out of the station, which could be the tightest I’ve ever seen taken at speed before on a woodie) and those in the front seat will appreciate the airtime (yes, I said AIRTIME) on the bunny hill before the lift.

After ascending the lift, riders enter the “initial descent tunnel” and that’s where all hell breaks loose. The ride is fast, noisy and the effect of blasting out fo the tunnel is impossible to describe.

From there the ride does a VERY close flyby of the station stairs, giving wonderful photo / video opportunities. A floater hill and a few head choppers later, the ride finds it’s speed…and keeps it until the brake run.

I don’t want to completely ruin the ride for you, but know that there are many “pops” of air on this ride, usually to set you up for another element. Call it a “tag team coaster” because they work perfectly together.

Coming into the final turn, you hit the magnetic (it’s Silicon Valley, gotta have some technology) and then back to the station. Pictorium fans will be saddened to learn that two of the entrances have been demolished, but the building itself still stands. 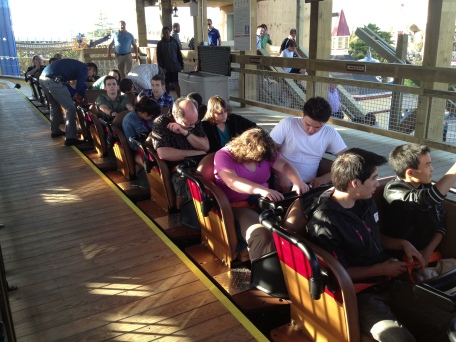 “Millennium Flyer” trains harken back to the “Golden Age” of coaster design. The trains are Gold / Red, Red Gold – in 49ers shades.

To quote my ride mate for this marathon session, “Airtime is back with GCI.”

We squeezed in nine (9) rides before the park shut down the line. Average wait times were 15 minutes, shrinking as more and more of the general public left. This ride is NOT EASY to marathon, but for all the RIGHT reasons. It is INTENSE, BREAKNECK PACED and to be quite honest, many of us in attendance were pinching ourselves, wondering how we got this ride to come here in the first place.

This is a winner all-around for a park more recently known for REMOVING rides than ADDING them. Be prepared for sharp transitions, “set up” surprises and well-timed elements. The ride is smooth with little attitude. This is not an, “airtime machine” but it has well over 8-10 (I kept losing count) pop airtimes. There are moments when you’re riding only on up-stops.

Now, you can take your kids on Grizzly as a warm up and test their (and your) mettle on Gold Striker.

In my opinion, this coaster could EASILY take on El Toro in national polls and in many cases it should WIN.

The ONLY thing missing from this ride…is YOU!

To learn more about Gold Striker or to purchase tickets to the park, visit www.cagreatamerica.com